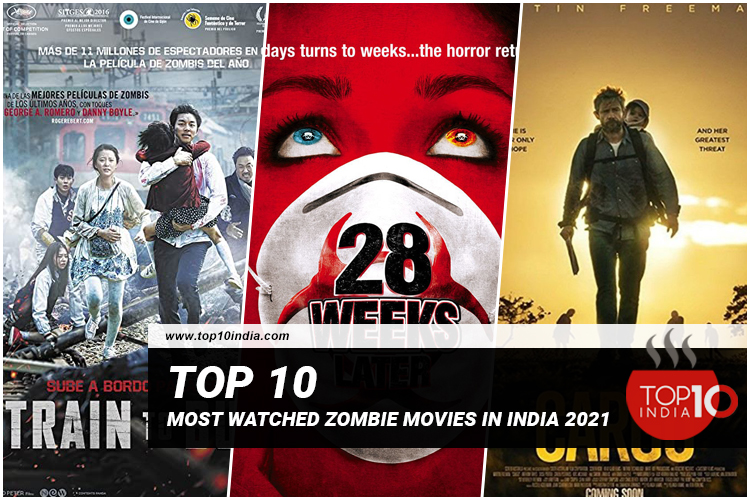 Top 10 Most Watched Zombie Movies in India 2021: Movies are always the perfect way to kill some time and simultaneously relax your mind. But if you want a rush of adrenaline and don’t want to go out do all the wild stuff possible, some quality horror movies can be your companion. And when it comes to horror, the zombie concept is enjoyed by all the horror movie enthusiasts out there. So here is a list of the few best among-the-rest zombie movies of all times that you can enjoy.

Train to Busan is a South Korean movie. The movie is undoubtedly filled with nail-biting thrill and suspense, with the main focus on the father-daughter duo trying to escape the blood-thirsty zombies. The majority of scenes are shot in a train’s confined space, which adds to the thrill factor as even the smallest space like the washroom becomes a thrilling battleground. Train to Busan is one of the most-watched and most loved non-western zombie movies for all the right reasons.

28 Weeks Later is a sequel movie but can be watched as a stand-alone as well. The outstanding yet disturbing graphics make the movie scarier and are definitely not for the faint hearts. The fear you will feel throughout the movie is so real, especially in these times of pandemic. The whole plot revolves around a pandemic outbreak that turns infected into zombies. The US Army tries to restore order and begin reconstruction, believing that they are past the danger, but the virus proves them wrong. Watch the movie to get that adrenaline rush. The storyline is interesting and complex, with a hint of some real emotions.

If you think zombie movies are all about just bloodshed and disturbing graphics, wait until you watch Cargo. The story is set in rural Australia and showcases the horrors of the aftermath of a deadly zombie pandemic. The plot focuses on a father’s struggle to keep his infant daughter safe when he finds out that he is infected and can be dangerous to his own child. With many heart-wrenching scenes, this movie will keep you at the edge of your seat and make you feel all sorts of emotions that are not always expected from this genre.

World War Z is about how a former United Nations investigator, Gerry Lane, investigates a sudden plague outbreak that is turning the human population into blood-thirsty zombies. Lane has to fight against time to investigate this disease before the whole human civilization sees its end. The story is not much different from the majority of the zombie movies made to date, but the tension built throughout with the time factor is something that will keep you on your toes until the very end.

Zombieland is a post-apocalyptic zombie comedy film. If you are someone who wants the thrill of a horror movie but cannot stand all the bloodshed and tension that follows, this one is definitely for you. The story focuses on three characters, a boy who is going to Ohio to check if his parents are alive, another young man who is in search of the last Twinkie (an American snack cake), and a girl who is headed towards an amusement park after learning that it is a safe place away from the zombies. Their journey is filled with tension yet a lot of fun and is sure to tickle your bones, which is not always the case when it comes to horrors. The story definitely stands out because the comedy element has been perfectly blended with the horror genre and is definitely a must-watch.

Dawn of the Dead, like most zombie movies, is filled with bloodshed and violence, and thrilling suspense. If you are a fan of a true blue zombie movie, this one will definitely keep you entertained throughout. It shows how a few survivors struggle to keep themselves safe in a city filled with zombies by breaking into a mall and trying everything to keep it secure. A lesson that can be learned from this movie is that in times of acute danger, we can survive only by standing as a whole and helping each other. The plot definitely builds the tension and offers the perfect hint of romance, which actually lightens the mood.

I am Legend is a post-apocalypse movie somewhat based on a novel of the same name. The story is about a scientist who is the sole survivor in New York City after a plague kills most of humanity and transforms others into a vampire-like monster. It shows the struggles of this scientist to find a cure to this plague and his attempts to reverse the aftermath of all the destruction.

Suspiria is a Spanish supernatural movie. The story focuses on a ballet student who transfers to a prestigious dance academy in Germany to perfect her ballet skills. But her experience in the new school does not go as planned as she encounters a series of horrific events, including countless deaths, which leads her to uncover the dark history of the place. The great cinematography and a compelling narrative combined with the great acting skills of the actors involved make it the perfect horror and are sure to give you the chills.

This movie is about a teenage girl named Maggie, who is attacked by a zombie and slowly turns into a cannibal herself. In an attempt to save her family herself, she runs away and urges them never to contact her. But her father is keen on protecting her, finds her, brings her back home, and tries to spend some quality time with his daughter through her transformation phase. The story is emotionally engaging as well as thrilling with the perfect dose of horror and suspense.

The Cabin in the Woods follows the story of five college friends who plan a little vacation and arrive at a remote forest cabin. What follows their vacation are some serious ghoulish activities. The rich magical atmosphere created in the movie perfectly sets the mood. The plot is nicely laid out and is sure to keep you engaged until the very end.

The above list of movies is sure to keep you on your toes. All these movies are not just about the horror factor. An equal amount of importance is given to the plot and graphics and all other things while making this top 10 list of movies.