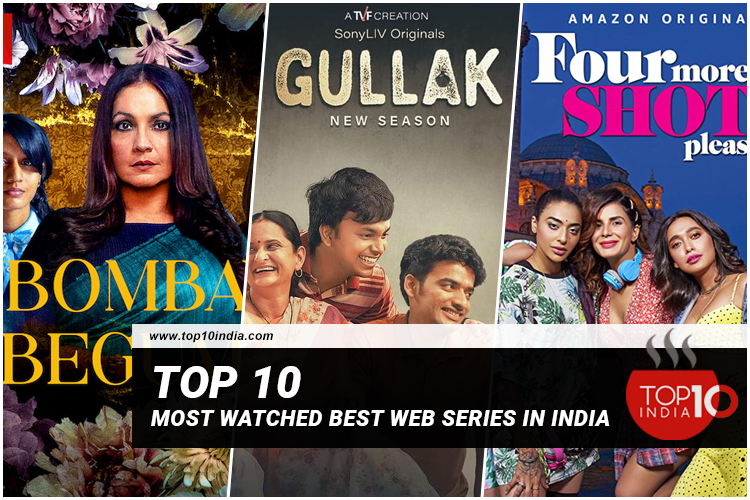 Top 10 Most Watched Best Web Series In India: Binge-watching is definitely not a task the easiest and most effective way to kill boredom, But picking what to binge-watch on is the toughest task, and every binge-watcher can agree on that. The time and effort it takes to find something of quality and match our taste are definitely stressful.

It is a Netflix web series that explores the lives of five women living in Mumbai. The story showcases how 5 ambitious women navigate their dream desires and disappointments in the modern world. The plot is complex and intense yet elegant and very much realistic. The actors bring the characters to life, and the brilliant cinematography has helped the show look excellent throughout.

Gullak is the story of a middle-class Mishra family and their day-to-day struggles. Set in a small town in North India, the story feels relatable, and the simple narrative helps to connect with the viewers easily. The story has many characters we all encounter daily in our lives and a good amount of humor, and the characters are very well portrayed by the actors making you feel connected. Overall this is a light-hearted family drama that you can enjoy while having quality family time.

Four more shots are the story of four women who live their life unapologetically, and the story focuses on the friendship between the four. It takes you through the lives of each character, how they make mistakes, learns from those mistakes, and move forward. The show very well portrays feminist ideologies in several plots. It is a light-hearted show flooded with drama and emphasizes various issues women face daily like lack of self-worth, body shaming, and unequal career opportunities. The show has definitely tried to change the old-school patriarchal concept. Overall this is a happy show that you can enjoy with your girl gang.

Pataal Lok is a crime thriller web series available on Amazon Prime video that throws light on the less discussed and dark side of rural India. The series addresses many issues, from caste discrimination to Islamophobia, and how some political parties easily use this in their favor. With a strong story and an amazing cast who do justice to their characters, you are sure to be hooked until the climax episode. This particular series has earned a lot of appreciation even from the experts and is definitely a worth watch

Arya is a crime drama web series available starring none other than Sushmita Sen. She plays the character of Arya, a 10th woman who to seek revenge on her husband’s Murder, joins a mafia gang and between all this also takes care of her three kids. Undoubtedly this is a well-crafted thriller with intense episodes and is gripping from the very beginning. The characters are all well written, and all the actors have done justice in portraying them on screen. If you are a fan of thrillers, then this one is definitely for you.

The family man is an action thriller series level on Amazon Prime video starring Manoj Bajpayee, whose character, Srikant Tiwari, is a middle-class man secretly as an Intelligence Officer for the threat analysis and surveillance cell. The story revolves around some true social and political events in our country on a day-to-day basis—the family man when received nominations for Filmfare OTT awards and eventually won five awards. The story is gripping and demands sharp attention from the audience as it perfectly portrays different angles of reality.

Mismatched is a coming-of-age romantic drama available on Netflix. It shows High School Romance friendship and has the perfect touch of drama. The chemistry between the characters does not go unnoticed and is also one of the major factors that contribute to the success of this series. Mismatched is based on Sandhya Menon’s bestselling book ‘ when Dimple met Rishi. The actors portray the characters of Dimple and Rishi, and if you are looking for a light-hearted rom-com, this is perfect for you.

Jamtara is a crime drama that was released on Netflix. It is a story of a group of small-town young men who run fishing operations and a cop who wants to fight it. Jamtara is actually a small town in India that is known to be a cybercrime hub. The story mainly focuses on a teenage boy named Sunny, a mastermind in phishing, and the actor has done an incredible job in portraying the character. The plot is very well executed, with an interesting storyline that keeps you engaged till the end.

Little things is a romantic comedy available on Netflix about a couple in their 20s who try to navigate the ups and downs of their work-life and relationship and, in the process, how to find themselves. The show beautifully depicts the realities of urban Indian life. The main reason viewers feel connected to the story is its characters—the chemistry between the actors’ something that should be appreciated. I have done a fabulous job bringing the characters to life on screen. If you are up for something romantic with a slice of life, this series sure won’t disappoint you.

As the name suggests, Kota Factory is set Kota, a hub for coaching centers where students from all over India come to prepare for various entrance exams. The series captures the life of IIT and medical exam aspirants as they face both competition and life. The story feels very realistic, thanks to the cinematography and outstanding work done by the young actors. The whole series is shot in monochrome, which definitely adds to the overall beauty and storytelling. It beautifully portrays the struggles of life from home and also shows the harsh reality at times.

I hope you enjoyed the list and enjoy your next binge-watching session. The list has covered almost every genre, so no one feels left out and can find something that suits your taste.