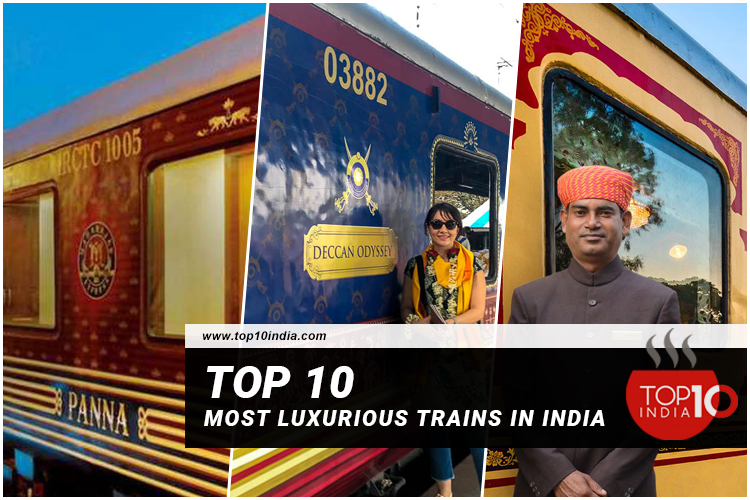 Top 10 Most Luxurious Trains In India: The Maharaja Express is the most luxurious train in India that runs on 5 major routes and provides its passengers all the best facilities. India has the fourth-largest train network in the entire world. As traveling by plane is still an expensive affair for the average Indian man, most of the Indian population depends on this vast network for their transportation needs. These trains will take you on an adventure through the various beautiful cities that are spread across India. All this can be enjoyed in the beautifully made coaches who are no less than a 5-star suite.

The service provided by trains is fast and cheap but is nowhere close to being called comfortable. Most of the time, it is filled with overly crowded coaches and bone-shaking ride quality. For those looking for comfort and luxury, traveling by plane is the only option. But, this narrative has changed as many ultra-luxurious trains have been introduced all over the country. But this luxury and comfort do cost a fortune. So let’s take a look at the Top 10 Most Luxurious Trains In India, which are also the best trains in India.

The Maharaja Express is one of the most expensive trains in India. It is also known as the all-time most luxurious train in India. The train runs on 5 major routes, which cover most of northern India. The train is equipped with two bar counters, a restaurant, lavish suite rooms, deluxe cabins, and butler service.

No 2. The Deccan Odyssey

The Deccan Odyssey is another one of the most expensive trains in India that run through Rajasthan, Gujarat, and Maharashtra. The Royal Blue color that the train adorns gives it a distinctively unique look. The train has 12 luxurious cabins that are well furnished and have all the amenities necessary for a comfortable stay.

No 3. Palace On Wheels

To boost tourism, the Palace on Wheels was renovated and re-launched in the year 2009. The train has the capacity to cater to 82 passengers. It is also one of the best trains in India to travel from. It also has beautifully made 39 deluxe cabins and 2 super deluxe cabins.

The Karnataka government and IRCTC launched the Golden Chariot in the year 2009. It is one of the luxury trains in India that covers southern India. This train was awarded as ‘Asia’s Leading Luxury Train’ in the year 2013. The train has well-equipped and luxurious interiors with traditional Indian design. It has two multi-cuisine restaurants along with a bar. The train also boasts of a gym and Ayurveda spa.

Buddha’s Circuit Train is categorized as one of the fewer-known luxury trains in India. This train runs through the beautiful states of Uttar Pradesh and Bihar, which is Buddha’s birthplace. This train uses coaches that are similar to the coaches seen in the Rajdhani Express.

No 7. Fairy Queen Express (Top 10 Most Luxurious Trains In India)

No 8. Lifeline Express (Top 10 Most Luxurious Trains In India)

Lifeline Express is also commonly known as Jeevan Rekha Express, and it is a mobile train-based hospital that travels throughout different parts of India. This express was started on 16th July 1991. This train was started as a collaboration between the Health Ministry, Indian Railways, and Impact India Foundation.

The train has a well-equipped pantry that makes it healthy and nutritious for the staff and the patients.

It is an expense-free service provided by the government.

No 9. Samjhauta Express (Top 10 Most Luxurious Trains In India)

Samjhauta Express train is run between the countries of India and Pakistan as a collaboration. This train was started on 22 July 1976 and ran twice a week. It surely isn’t one of the luxury trains in India 2021, but it is an excellent peacekeeping effort by both nations.

No 10. Maitree Express (Top 10 Most Luxurious Trains In India)

1. Which is the most expensive luxury train in India?

The Maharaja’s Express is the most expensive luxury train in India, with its Presidential Suite costing a whopping INR 37 93,482.

2. Which is the best train in India?

The Golden Chariot is the best train in India with its comfortable, luxurious, and feature-rich interiors.

The Palace on Wheels is the first luxury train in India.

4. Which is the most luxurious train in India?

The Deccan Odyssey is claimed to be the most luxurious train in India.

Published in A to Z, Destination, News and Social