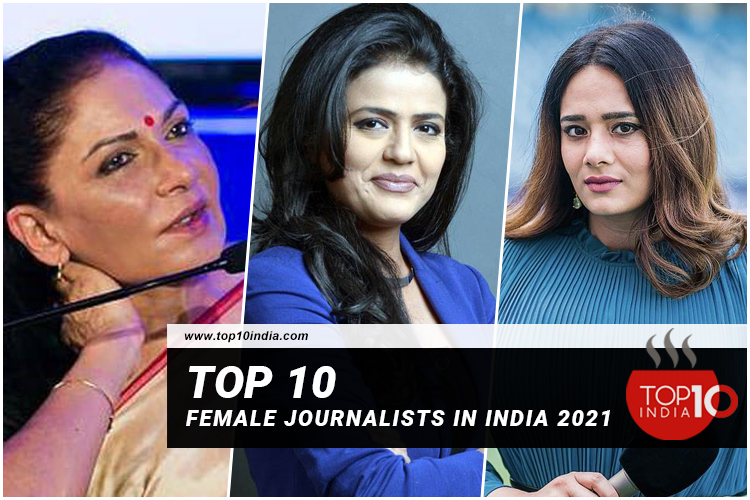 List of Top 10 Female Journalists In India 2021: Amid the chaos of the Indian Media today, few journalists have not swayed from the path they chose and have done everything to remain faithful to their profession and deliver important news. Among these faithful journalists are some famous female journalists of India, trying their best to deliver us the latest news and keep us updated on the countries and the global situation.

During this harsh time, with an ongoing global pandemic, natural disasters, and what not, India went through a lot and is still going through. People twice as much are now connecting to news to keep themselves updated every minute. While some journalists are busy ignoring the harsh reality, several other female journalists are taking a strong step and providing us with the truth. Here is the entire list of The Top 10 Female Journalists In India 2021

In 1975, Madhu Trehan and her father, V.V.Purie, founded and started the news magazine India Today. In 1968, she completed her graduation from Welham Girl’s School in Dehradun. In London, she has also been part of Harrow Technical College and School of Arts to pursue journalistic photography. Lastly, she completed her master’s in journalism from the University of Columbia, New York.

India’s first video news magazine Newstrack was produced and anchored by her. Yakub Memon, who was convicted in the 1993 Bombay bombings, was only interviewed by her, a rare interview. She is one of the most popular female journalists in 2021 and the founding editor of India Today.

Shweta Singh is a famous Indian News presenter and journalist. She has completed her graduation in Mass Communication from Patna Women’s College, Bihar. She started her journey in this media industry while doing her first year of college.

At first, she started dealing with electronic media, and in her later days, she joined Sahara and Zee News before working with Aaj Tak. Shweta Singh is an Executive Editor and news anchor at the famous Indian news channel Aaj Tak. She has also have been part of many movies as an Aaj Tak news presenter or anchor.

Mayanti Langer is a famous Indian sports journalist and has a hobby of football. She completed her higher studies from Hindu College, Delhi University though she is a Christian. In childhood, in her school days, she was part of the football team of her school.

She is generally seen working for Star Sports. Some of the hosted tournaments are FIFA World Cup broadcast on ESPN, 2010 Commonwealth Games, 2011 Cricket World Cup, and more. She has also worked at Zee sports. Mayanti is also one of the popular female journalists in India 2021.

Avantika Singh started her career in journalism in 2002. Avantika Singh was born in Delhi, and her hobbies are spending all her leisure time doing exercises and spending time with her family. As an anchor, she has covered some exceptional stories such as the 2005 London blasts, 2009 General Elections, 2004-05 US Presidential Elections, and more.

Presently, she is a news anchor at India Today. In the past, she has worked with prime-time news as their anchor, reporter, and TV producer for different international shows. She is everyone’s favorite anchor as she has always been inspired and mesmerized with her ultra energy and confident professional attitude.

Sagarika Ghose is a famous Indian journalist, columnist, and author. She has worked with Outlook, The Times Of India, and The Indian Express. From St. Stephan’s College in Delhi, he completed her Modern History graduation and ended her education with M.Phil.

She has won several awards and has written a biography of Indra Gandhi, Indra: India’s Most Powerful Prime Minister.

Shaili Chopra with being an Indian business journalist is a famous author and entrepreneur. She is the founder of women empowering platform called SheThePeople TV. She has won the 2012 Ramnath Goenka Award for Excellence in Business journalism.

She completed her studies at the Asian College of journalism and had become an excellent and confident journalist. Traveling, playing golf, reading, and writing books are some of her hobbies.

Shereen Bhan is an Indian news anchor and journalist. Shereen Bhan is currently the Managing Editor of CNBC-TV18. There are several shows like Young Turks, Indian Business Hour, and more which are hosted by anchored and hosted by her. She is one of the beautiful female journalists in India 2021. Shereen Bhan’s hometown is Kashmir; that’s why she has completed her studies at Kendriya Vidyalaya in Kashmir.

Rana Ayyub Khan has worked for a Delhi-based political and investigative news magazine named ‘Tehelka.’ She was later hired by Washington Post to contribute to the Global Opinions column. Rana Ayyub Khan was born in Srinagar, Jammu, and Kashmir in India.

She did her schooling at one of the well-known institutes of Srinagar, and after that, she completed her graduation from Jamia Milia Islamia in New Delhi. She has some awesome hobbies like traveling, listening to music, and reading. She also has noticeable experience in radio shows and filmmaking.

Faye D’Souza is an Indian television news anchor and journalist. Faye has been awarded the RedInk Award for ‘ Journalist of the Year’ in 2018. She has also worked as an executive editor of Mirror Now, now owned by The Time Now.

Nidhi Razdan has worked as an executive editor of NDTV, anchored primarily for the famous weekly debate show The Big Fight and the news debate show Left, Right, and Centre. She was also asked to work as an ‘Associate Professor’ at journalism school at Harvard University. She is also one of the popular female journalists in India 2021. Nidhi Razdan took birth in New Delhi, but her hometown is South Kashmir. Interestingly, her hobbies are reading books and listen to music. She is also very fond of dogs as she has a dog at her place.

Who is the best female journalist in India?

Shweta Singh is the best journalist in India.

Who is the No 1 journalist in India?

Avantika Singh is the No. 1 journalist in India.

Who is the best anchor in India?

Sagarika Ghosh is the best female news anchor in India.

Who is the most loved anchor in India?

Madhu Trehan is the most loved anchor in India.