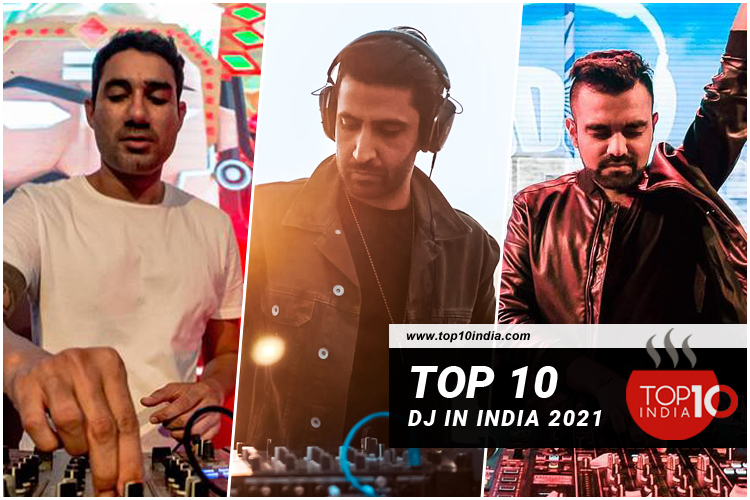 List of Top 10 DJ In India 2021: DJ’s as soon as anyone hears this word, this makes them excited. DJs create a very different and energetic environment for everyone. Every human being, even if they are young or old, everyone enjoys the DJ a lot. DJ’s are the one that mixes different songs and creates a very different and unique kind of music that everyone loves. In India wedding, function, and everything is incomplete without DJ’s. Indian people are so obsessed with DJ’s they want DJs everywhere. In the new era, people install large speakers and different colored lights in their houses to enjoy the DJ vibes in their houses. This is fun, but the real DJ vibe is the real DJ vibe. You can only feel that vibe in clubs, pubs, and concerts. Many popular DJs are loved a lot for their unique and great mix of music. Here is the list of Top 10 DJs in India.

The Full form of DJ is ‘Disc Jockey’; Disc Jockey is the person that uniquely mixes different songs. DJ uses different kinds of equipment to create different mashups, and they mix different rhythms and tempos to give music a unique taste. DJs mostly use special audio mixers, DJ mixers, headphones, turntables, and many more things. In India, these kinds of DJs are mostly found in Clubs and concerts. Clubs are the place where people enjoy the DJ and dances with their friends. Concerts are most likely considered the live shows where the DJ performs in an open area, and everyone enjoys it. In India, many singers and DJs organize their concerts where thousands of people join them. So Here we go and know about the most famous and most loved DJs of India.

Nucleya is the most loved DJ in India. The original of Nucleya is Uday Sagar. He was born on 7th December 1979; his birthplace is Agra, Uttar Pradesh, in India. Nucleya started his career journey in 1998 by co-founding Bandish Projekt with Mayur Narvekar and Mehirr Nath Chopra. After working with them for 12 years, he left the Bandish Projekt and started his journey alone. After a lot of hard work and struggle, he launched his first album ‘Koocha Monster’ in 2015. From 2012 to 2015, he faced many problems financially. But after 2015, when his first album was launched, everything was being better day by day. After he launched many other albums, some were his single albums, and some collaborated albums. During his journey, he got himself a new name, ‘Nucleya,’ and everybody now knows him by this name. He was also won the Global Indian Music Awards in 2016.

DJ NYK is the second most popular DJ in India. His real name is Nikhil Sahni, and he was born on 15th June 1985. He was born and raised in Delhi, India. He was interested in DJs from his childhood; he also produced many remix songs in his high schools. After his high schooling, he completed his graduation from Delhi University. At the starting of his career, he needs a platform, so he started DJs. He got his first debut in Bollywood with the movie ‘Billu Barber’; after that, he has done many remixes for different movies. He is also awarded No. 1 Bollywood DJ at VH1 MyFav Awards in 2012 and 2013.

DJ Chetas is ranked at the third position in the list of Top 10 DJs in India. The original name of DJ Chetas is Chetas Shah. He was born on 30th March 1987 in Mumbai, India. He belongs to a Marwadi family.  He has done his schooling at Jamnabai Narsee School in Mumbai. After this, he studied further at Narsee Monjee Institute Of Management and Higher Studies. He started his journey with Bollywood mashups, and the first mashup he made was ‘Salman Khan Mashup.’ After this, he made many mashups of Bollywood movies. He also participated in the DJ Mag competition and got 59th position out of 100. In 2016, he was ranked 33rd position. He was also honored with the Mirchi Music Awards for Best Recreated Song of the Year (Movie – Loveyatri).

DJ Shaan is ranked at the 4th position in the list of Top 10 DJs in India. The full name of DJ Shaan is Shaan Singh. He was born on 18th June 1995 in Mumbai. He started his DJ journey in 2010 at the age of 15 by participating in Asia’s premier music festival Sunburn Goa. At that time, he was the youngest person to play DJ at an international music festival. He also played the DJ at Tomorrowland heaven. His first single album, ‘Light up the World’ ft. Lauren Evans was ranked in the top 15 on Beatport charts. Shaan is also supported by international artists like – Nicky Romero, Tritonal, and Ruben De Ronde.

Progressive Brother is a duo band from Delhi, India. The real names of these duo boys are Sunny Sharma and Karan Bhalla. At the starting of the journey, Sunny was a banker, and Karan worked at a multinational Insurance Company. Later in 2012, they both decided to start their music career as ‘Progressive Brothers’. The first-ever track they released was ‘Veda’ collaborating with Richard Durand. They have also worked with- David Guetta, Martin Garrix, Oliver Heldens, Dada Life, Seven Lions, and many more. They were also named as India’s Best Trance DJs for 2012 – 2013 by Myfavdj Awards.

The original name of DJ Sartek is Sarthak Sardana. He was born on 24th July 1988, in India. In the starting, he studied for CA and passed the main examination. After that, he served in corporations for some time. And then he decided to start his DJ journey. He is the 1st Indian DJ on Hardwell’s Revealed Recordings, with all the releases on Beatport Top 100 charts. He was also the opening act for Justin Bieber, Armin Van Buuren, Martin Garrix, Steve Aoki, and many more during their India Tour. One of his tracks, ‘Back To The Future,’ was premiered by David Guetta on his international radio. His latest track was ‘Jump Right After You’ became viral only after 3 hours of release.

Nikhil Chinapa ranks in the 7th position in the list of Top 10 DJs in India. He was born on 6th June 1973 in Banglore, India. After his schooling, he studied Architecture at Sreeniyasaiah College Of Engineering. He used to do gigs as a DJ at parties to earn his pocket money in his college life. And this raised his interest in music. His new journey was started when he won the MTV VJ Hunt in 1999. After this, in 2000, he debuts in the film ‘Snip.’ Then he hosted many seasons of MTV Splitsvilla. He was also a judge in many different shows such as – Rock On, MTV Mashups, Fame X, and seasons 4, 5, and 7 of MTV Roadies. In 2003, he co-founded Submerge with his wife Pearl and Hermit Sethi. It was declared as one of the largest EDM companies in India. He was also honored by Indian Television Academy Awards in 2003.

Anish is a multi-talented man who is an Indian music producer, Singer, and DJ. He was born on 22nd November 1989, in Goa, India. Anish has done his schooling at Vasvo Da Gama School in Goa. Later he completed his mechanical engineering from Goa Engineering College. He started playing DJ from his high school. He also played DJ at college parties and became a popular guy at the college. Later he started played DJ at nightclubs in Goa. He was also invited to play DJ at Sunburn Festival. He has also performed with many international artists such as – Kygo, David Guetta, Tiesto, Steve Aoki, and many more. In 2014 he was awarded as the DJ of the Year by MyFav Awards.

Zaedan ranks at the 9th position in the List of Top 10 DJs in India. The original name of Zaedan is Sahil Sharma. He was Born on 2nd July 1995 in Gurgaon, Haryana, India. After completing his schooling at Heritage School, he studied mass communication at Amity University. After this, he went to Mumbai to study Sound Engineering. He launched his track in 2014 ‘Land Of Lords.’ Later, he realed many tracks; some of them are – Yesterday, Never Let You Go, Tere Jaane Se, Something Like Tere Bina, and many more.

Lost Stories is a duo of two DJ boys. The original name of these boys is Prayag Mehta and Rishab Joshi. The first album of this duo was released in 2013, ‘The Generation.’ Some most popular tracks of this duo are – False Promises, The Purple Cow, Paradise, Mahi, Bombay Dreams, Noor, and many more. And some of the most popular remixes are – Stay in My Dream, My Blood, Perfect Dream, With me, Ashna, Sorry, and many more. This duo has given us many tracks and remixes, and they all are just fab. Their latest remix was ‘OK Not To Be Ok’ of Marshmello and Demi Lovato’s in October 2020.

Nucleya is the most popular DJ in India.

Progressive Brothers is the best duo DJ in India.

Published in A to Z, Entertainment, Personality and Social