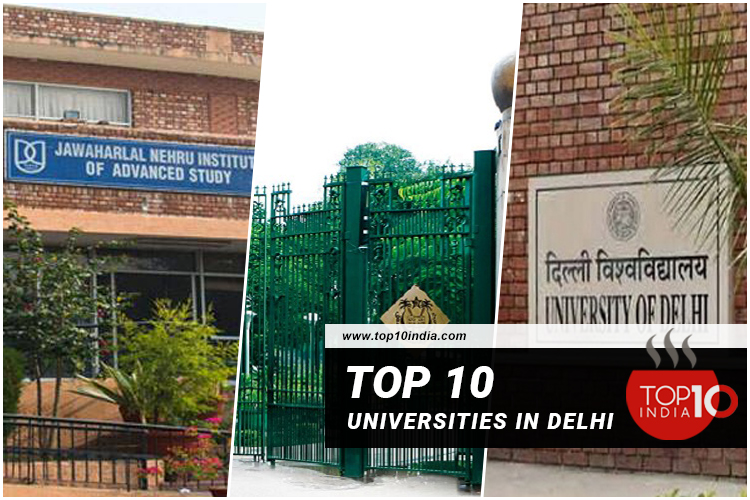 Top 10 Universities in Delhi | List of Best Famous University: New Delhi, the capital of India, has a population of 21.75 million. Hindi is the most spoken language in Delhi. English is primarily used as a formal language by business, private, and government institutes.

If you are looking to pursue UG and PG programs in Delhi NCR, below is the comprehensive list of Top 10 Universities in Delhi. The list has all the currents updates, courses offered, and the eligibility criteria for admission.

Jawaharlal Nehru University is among the best educational institution in the country. It was established in 1969. It is a public central university located in New Delhi, India. The courses offered by the university in an undergraduate category are BA and B. TECH. In the postgraduate category, the courses offered by the university are MSC, MBA, MA, M. TECH, MPH, Ph.D., and MCA. JNU has been ranked 2nd in the university category by the National Institute Ranking Framework (NIRF)2020. The eligibility criteria of JNU 2021 are the minimum academic qualifications and eligibility requirements for admission to a particular program in the university. Eligibility criteria vary with different courses and student categories such as general, SC/ST/OBC/PWD.

It is a central university located in Delhi. It was established in 1920 in Aligarh. It is one of the members of the Association of Indian Universities (AIU) and is accredited with an “A” Grade by the National Assessment and Accreditation Council (NAAC). Jamia Millia Islamia University has been ranked 10th in the University category by National Institute Ranking Framework (NIRF)2020. The university offers a variety of programs like UG, Ph.D., diploma, PG, PG diploma. Admission to this university is made based on entrance exams, interviews,s and group discussions. The university campus is well-equipped with all basic facilities such as a medical center, smart classrooms, including Wi-Fi, auditorium, computer labs, seminar hall, hostel facilities, and many more. The university also focuses on sports activities as it has a badminton court, basketball court, snooker room, table tennis court, cricket ground, and more.

Jamia Hamdard University is a government-funded institution located in New Delhi, India. The inauguration of Jamia Hamdard University was done by former Prime Minister of India Shri Rajiv Gandhi on August 1, 1989. It was also awarded for Institute of Eminence status by the Ministry of Human Resource Development in 2019. Jamia Hamdard University has been ranked 21st in the university category by the National Institute Ranking Framework (NIRF)2020. Admission to this university for some courses is made on a merit basis, and for some courses, admission is made based on entrance and interview round. It offers many undergraduate courses in nursing, management, Unani medicine, engineering, law, humanities, IT, pharmacy, and postgraduate courses in business administration, engineering, and medicine.

It is one of the best private universities in the Delhi/NCR region. It was established in 2005, founder of Amity University, Noida is Ritanand Balved Education Foundation. It is the only Asian university to get US regional accreditation. NAAC is also accrediting the university with an ‘A+’ Grade. Amity University, Noida, was ranked 21st for Pharmacy by the National Institute Ranking Framework (NIRF)2020. University also offers education loan facilities in collaboration with many banks like ICICI Bank, Axis Bank, Canara Bank, etc. Admission is made on a merit basis, and final selection is made based on the GD/PI round. Candidates have to visit the official website to apply for online applications. Amity University, Noida are BBA, BCA, MBA, BCA, BA, M.sc, and many more.

Delhi technological Institute is also known as Delhi College of Engineering. It was established in the year 1941. NAAC is also accrediting the university with an ‘A+’ Grade. The college is having 9 boys’ and 6 girls’ hostels on the campus. Institute offers more than 70 courses across 8 streams. Delhi Technological Institute has been ranked 45th  in the university category by the National Institute Ranking Framework (NIRF)2020. Courses offered by institutions are BBA, MBA, B. TECH, BA. (Hons), B.Eds., and M. TECH. Admission in most of the programs is made based on the entrance examination. Admission is made by filling up the application forms in online mode.

Shiv Nadar University, Delhi, was established in 2011 in Dadri, Uttar Pradesh. This university was founded under the provision of the Uttar Pradesh act, 2011. Shiv Nadar University has been ranked 72nd all across India by National Institute Ranking Framework (NIRF)2020. The university offers courses across undergraduate, postgraduate, diploma, and doctoral programs in Arts, Film and Television, Science, Management, Engineering, and Business. Admission in many courses is made based on students’ performance in class 12th and Shiv Nadar University Scholastic Aptitude Test (SNUSAT) and Academic Proficiency Test (APT). A full-time mode of education has been provided in this college. The university is having a record of 91.3 placements in 2019.

It was established in 1976 founded by an act of the Haryana Legislative Assembly. NAAC was also accrediting the university with an ‘A+’ Grade in 2019. It is a Residential university, including 38 post-graduate departments and 11 faculty. More than 260 institutions/colleges are affiliated with this university. This university offers courses in Engineering, Computer Sciences, Management Sciences, Technology, General Education and many more. MDU Rohtak has been ranked 76th in the University category by National Institute Ranking Framework (NIRF)2020. Maharshi Dayanand University also provides distance education for several UG and PG courses, namely BA, BCom, MA, MSc, M. Com, and many more.

Guru Gobind Singh Indraprastha University is also known as Indraprastha University (IPU). It was established in 1988. University is recognized under section 12B of the UGC act. It offers UG, PG, Ph.D., and diploma programs across its affiliated colleges, schools, and government colleges. IPU university has been ranked 95th in the University category by the National Institution Ranking Framework (NIRF)2020. Courses offered by the university are BBA, BCA, MCA, MBA, B. com, BBA-LL. B and many more. Many courses admission in this university is made based on Entrance Examination officially called as CET. In IPU, 85% of seats are for Delhi region candidates, and the remaining 15% are for candidates belonging outside the Delhi region.

Ambedkar University Delhi (AUD) is also known as Bharat Ratna Dr. Ambedkar University Delhi. It was established in 2007 by the Government of NCT of Delhi through an Act of the Delhi Legislature. NAAC is also accrediting the university with an ‘A+’ Grade. AUD provides good Infrastructure in well-stocked libraries, online journals, reading rooms, and computer labs. AUD is UGC- recognized university. Ambedkar University Delhi (AUD) is ranked in the band of 101-150 top colleges based on National Institution Ranking Framework (NIRF) 2020 Rankings. University has shown much better improvement as compared to last year’s stats. Admission of all UG programs is made based on the candidate’s 12th examination result. Some of the highlighted courses offered by the university are BA Hons. (Mathematics), BA Hons. (English), BA Hons. (Economics), BBA and many more.

We tried to update you about the top 10 universities in Delhi/NCR regions offering world-class education and other facilities. It is seen that the list is dominated by the govern owned universities, though some of the private universities also secured a spot in our top 10 list. These universities have been imparting quality education to the students over many decades, which has helped them become successful people in their lives. Concluding, We hope this list will help you to select the right university to make your college time worthy and memorable.

Published in A to Z and Education