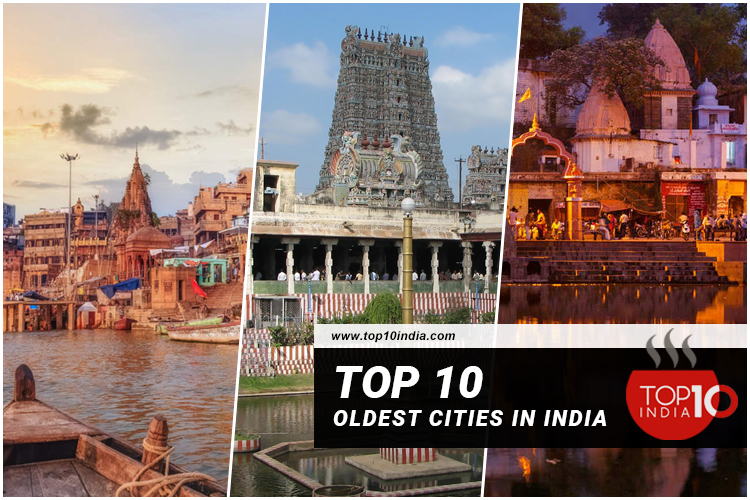 Top 10 Oldest Cities in India: India has a very great and rich history. In ancient times many dynasties ruled the country ‘India.’ Some made the country more glorious, and some made it miserable. But the beauty of India never changed. It remained the same. There are many beautiful old temples, mosques, churches, forts, and many more things. India is also one of the oldest countries because Maurya, Mughals, Tomars, British, and many other empires ruled India for many years.

India is a country of beauty and charm; there are many places in India, old but still, their beauty is incredible. India consists of two types of cities – the cities that are being in habitat for many years and cities made by dividing parts of big States. In this article, you can learn about the cities that are being habitats for many years. Here is the list of the Top 10 Oldest Cities in India.

Varanasi is the oldest city in India. It is located on the banks of the holy river Ganga and is also considered the major religious center in India. It is one of the cities of seven sacred cities in Hinduism and Jainism. Varanasi is the major industrial area for silk fabrics, perfumes, ivory works, and sculpture. The climate of Varanasi is a Humid Subtropical climate; summer starts from April and lasts in June, monsoon comes between July to October. Winters of December to February make the city colder. Both domestic and foreign tourists are seen there. Indian people visit there for praying, and foreigners visit there to known the Indian culture and religion. There are many places to visit in Varanasi – Jantar Mantar, Ramnagar Fort, Ghats, The Kashi Vishwanath Temple, Hazrat Sayyed Salar Masud Dargah, Abdul Razzak Mosque, Sarnath, and many more. Many Bollywood movies were also shot in the epic city; some are Piku, Raanjhana, special 30, Shubh Mangal Zada Saavdhan, and Gangs of Wasseypur.

Madurai is a city that is located at the banks of River Vaigai. After the research, it is believed that this city was formed in the 3rd century BCE. The city was ruled by Pandyas, Cholas, Madurai Sultanate, Vijaynagar Empire, and British East India Company in ancient times. The most famous Meenakshi Temple is also located in Madurai. The major industries in Madurai are – automobile, rubber, chemical, and granite. The climate of this city is a tropical wet and dry climate. Madurai is the major center of learning for Tamil culture, literature, art, music, and dance. Madurai also consists of some tourist attraction places – Gandhi Memorial Museum, Vaigai river, and Thirumalai Nayakkar Mahal.

Ujjain is a city that is situated at the eastern bank of the river Shipra. Chandragupta, the Maurya emperor, occupies Avanti to his empire. After the Mauryas, this city was ruled by many other empires and dynasties. After the independence of India, this city became part of the Madhya Bharat. The climate of Ujjain is a humid subtropical climate. There are many religious places in Ujjain to explore the traditional and culture – Kal Bhairav Temple, Gopal Mandir, Chintaman Ganesh Temple, Mangalnath Temple, and Mahakaleshwar Jyotirlinga. Ujjain Simhastha is one of the biggest and famous Hindu religious Mela. It is organized once every 12 years, on the banks of the Kshipra river. The previous Simhastha was organized from 22nd April 2016 to 21st May 2016 in Ujjain.

Patna city is situated on the southern bank of the holy river Ganga. The city also gets on the river- Sona, Gandak, and Punpun. Patna is the 19th largest city in India. According to history, Patna was discovered in 490 BCE by the king of Magadha. In earlier times, this city was known as ‘Patliputra.’ Patna is the city where some great astronomers and scholars like – Chanakya, Vatsyayana, and Aryabhata were born. The climate of Patna is a Humid subtropical climate. The main industry of Patna is agriculture. It mainly exports grain, rice, sugarcane, and sesame. Some most famous visiting places in Patna are Gandhi Maidan Marg, Stupa of Buddha Smriti Park, Patna museum, River Ganga, and Statue of Mahatma Gandhi in Gandhi Maidan.

Kannauj is the city of the state of Uttar Pradesh. Many dynasties ruled this city in ancient times. Some of the major dynasties were – Maukhari dynasty, the Vardhana dynasty, and the Ghaadavla dynasty. During the rule of the Ghaadavla dynasty, the city got extraordinary glory. Kannauj consists of major industries of perfumes, tobacco, and rose water. Whenever you visit Kanauj in life, don’t forget to buy its traditional Kanaujji perfume, as it is one of the most popular perfumes in India.

Delhi is a trendy city of India that is covered by Haryana state from three sides and by Uttar Pradesh from the east side. Delhi is also the second-most productive metro area of India. This city is occupied before the second millennium BCE. The climate of this city is a humid subtropical climate. Delhi is the largest commercial center in northern India. There are many historical places and temples to visit in Delhi. Some of them are – India Gate, Red Fort, Qutub Minar, Akshardham, Laxmi Narayan Mandir, Gurudwara Bangla Sahib, Lotus Temple, and many more. Delhi is also famous for its street food because you will get many unique things to eat. Some famous Delhi dishes are – Parathas from Paratha Wali Gali, Mutton Korma at Karim’s, Jama Masjid, Pav Bhaji at New Arjun Bombay Pav Bhaji, Jalebi, at Delhi’s Old Famous Jalebi Wala, and many more.

Gwalior is a major city in the state of Madhya Pradesh. In ancient times, the city was ruled by many Kings; some of them are – Kachchhapaghatas, the Tomars, Mughal Empire, and the Marathas. According to history, it is believed that Gwalior was founded in 8 AD. Some Kings that ruled this city were – Gurjar-Pratihara dynasty, Iltutmish, and the Tomar. Man Singh also but his dream ‘Man Singh Palace’ in Gwalior. Tigar Dam is also located at the border of the city. The climate of Gwalior is a sub-tropical climate. Gwalior consists of a major position in Indian classical music, art, and literature.

Pushkar city is located about 10 km northwest of Ajmer and about 150 km southwest of Jaipur. This city is a pilgrimage place for Hindus and Sikhs. There are many historical temples in this city. Pushkar city is also mentioned in Ramayan, Mahabharat, and Puranas. Brahma Temple is the most famous temple in Pushkar, and that was built by  Pushkar, father of Vedmata Gayatri. Non-vegetarian food is not allowed in this city. Pushkar Fair and Holi are the main attractions for tourists.

Ayodhya is a city located in the state of Uttar Pradesh. Ayodhya is the birthplace of Lord Rama and also part of the incredible Ramayan. Gautam Buddha and Mahavira also visited and lived in this city. The climate of this city is a humid subtropical climate. Some historical places to visit in Ayodhya – Hanuman Garhi Fort, Ramkot, Nageshwarnath, Brahma Kund, and Pam ki Paidi. This is a main pilgrimage for the Hindus.

Kollam is an ancient seaport and city in Kerala. This city is located 66 kilometers north of the state capital Trivandrum. From the 3rd century BC to–12th century, this city was considered a developed port. The climate of Kollam is a Tropical monsoon climate. There are many ancient temples, mosques, and churches in this city. Kollam is a famous city with an excellent export background in Kerala. Kollam Fest is the main tourist attraction for tourists. Thirumullvaram Beach is one of the most popular beaches of Kollam.

Varanasi is the oldest city in India.

Mumbai is considered the No 1 city in India.

4. Which is the safest city in India?

Kolkata is the safest city in India.