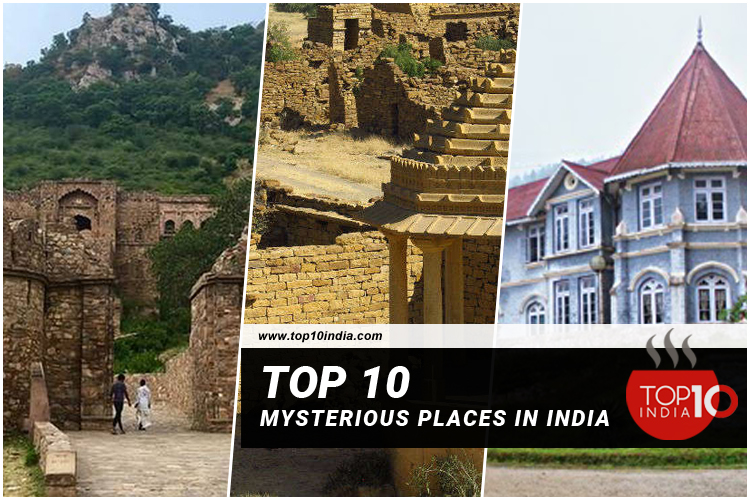 Top 10 Mysterious Places In India: Bhangarh Fort in Rajasthan is the number 1 most mysterious place in India with some rumors hidden inside, surrounded by a pond from all sides. India is a country in South Asia, the second-most populous and the seventh-largest by its area. The places in India are beautiful and full of nature, but there are still scary and dangerous mysteries and have many stories in some areas. These places have always been the most discussed ones in the country because of their dark and untold secrets.

Many visitors have explored mysterious Places in India; some have had good experiences, whereas some had quite scary ones. Each place has a different and unique story connected with it. Some places have good ones while some have terrible ones. Out of all these stories, the mysterious ones remain at the top among the popularity graphs of places. We all are curious to know more about such places; this even makes them more liked and popular. India is a hub of such haunted places. Listed below are the top 10 mysterious places in India.

Bhangarh Fort, a 16th-century fort that is built in Rajasthan, India. There are many rumors spread about the fort, but they are hidden in the fort’s beauty. This fort is surrounded by all the sides, with a pond area having natural stream falls.

A very mysterious place in India, Kuldhara village was established nearby the 13th century in the Jaisalmer district of Rajasthan. Kuldhara is a forsaken village once people inhabited it. Still, according to critics, Salim Singh, the powerful and corrupt prime minister of the Rajasthan, fell in love with the daughter of the Khuldara head, and he craved to marry by forcing her.

Dow Hill is the most haunted hill station of India located near Darjeeling in Kurseong. The Dow Hill is popularly known for its beautiful vistas, orchid gardens, forested hills, tea plantations, home to a death road, a headless ghost, haunted school, and countless real ghost stories with some rumors. Many abnormal and paranormal activities never stop occurring in Dow Hill.

Dumas beach is rural, alongside the Arabian Sea. Beach is a well-known tourist destination in South Gujarat and popular for being in India’s top 10 mysterious and haunted spots. The beach is known for its black sand and haunted atmosphere because it was once used as a Hindu burial site.

Jatinga is a small rural village, and Assam’s only hill station is known for the mysterious suicide of birds during certain weeks of the year. The local people of Jatinga first observed few birds dying; those people compared the birds with spirits and ghosts. Still, later on, there were incidents recorded where many other animals were seen committing suicide from that same particular area.

Mussoorie is a quite popular holiday destination among Indians, especially for those residing in north India. The Lambi Dehar Mines are situated in this beautiful hill station only and have been a debatable topic for a long time in Mussoorie. This place is Haunted and mysterious in the Mussoorie Range of Uttarakhand.

Agrasen Ki Baoli is a historic landmark in Delhi, established by the legendary king Agrasen. It has been haunted for years. Even though this place is haunted, many Bollywood movies have used it; movies such as Pk, formula 1, sultan, etc., are filmed at this haunted place.

Ramoji film city is around 1,666 acres in area, also known as the largest film city globally, and has been certified by the Guinness World Record. Nearly 2 million tourists visit this massive place every year; it was made by a Telugu film producer Ramoji Rao in 1996.

D’Souza Chawl was active and full of feel place, but at night its vibe changes. The stories and rumors are made that this place becomes haunted at night. The main story is that a woman once was filling water from the well and fell into the crawl well; people have spotted a woman’s figure who passes away later as she is harmless, but people are told that not to go alone there at night.

Bombay High Court is an iconic building in the city of Mumbai and is said to be haunted. It is said that the spirit of a murdered lawyer haunts the courtroom for the last 30 years. This place was established in 1862 and is one of the oldest courts present in India.

1. What are some haunted places in India?

India has no dearth of places that are considered to be haunted; Bhangarh Fort remains the most popular one among all these places.

2. Are there any haunted places in India?

Yes, India is full of haunted and mysterious places; you can find them here in abundance.