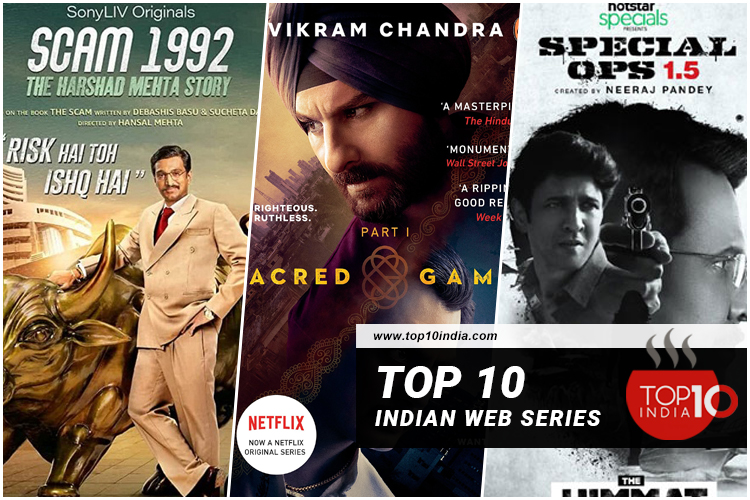 Top 10 Indian Web Series | Famous Web Series In India: A web series is a series of scripted or non-scripted online videos, generally in episodic form, released on the Internet, which first emerged in the late 1990s and became more prominent in the early 2000s. A single instance of a web series program can be called an episode or “webisode.” However, the latter term is not often used. In general, web series can be watched on various platforms and devices, including desktop, tablet, laptop, and smartphones. They are different from streaming television, which can be watched on various streaming platforms.

In this article, we are going to discuss the top 10 Indian web series. This list will categorize these series based on their popularity, downloads, IMDb rating, and many more details. A media consulting firm specializing in tracking, testing & forecasting-based consulting for films, television, OTT & more has released a list of the 10 most-loved Indian web series. Scam 1992 is ranked in the first position in this list.

National Award-winning director Hansal Mehta’s debut web series, released on October 9, 2020, has received the highest IMDb rating among all the other Indian web series on Netflix, Amazon Prime Video, Disney+ Hotstar, SonyLIV, Voot, and TVFPlay. It is based on the scam run by a stockbroker called Harshad Mehta in the 1980s-90s Bombay. Scam 1992 chronicles Harshad Mehta’s meteoric rise and catastrophic downfall, which resulted in a market crash. If you liked Bad Boy Billionaires: India, you must watch this one. It’s streaming now on SonyLIV. The series stars Pratik Gandhi, Sharib Hashmi, Shreya Dhanwanthary, Hemant Kher, and Nikhil Dwivedi.

Sacred Games was the first Indian web series on Netflix that really captured the viewers’ attention. Nawazuddin Siddiqui plays a gangster called Ganesh Gaitonde, who contacts police officer Sartaj Singh, played by Saif Ali Khan, in his final moments. In this phone call, he narrates his entire life story to the cop and then pleads with him to save the city from an impending doom coming in 25 days. The show has two seasons and some mind-blowing characters that will stay with you even after the show. The stars of the series are Radhika Apte, Girish Kulkarni, Neeraj Kabi, Jeetendra Joshi, Rajshree Deshpande, Karan Wahi, Sukhmani Sadana, Aamir Bashir, Jatin Sarna.

Special Ops is also among the brilliant Indian web series on Netflix, Amazon Prime Video, Disney+ Hotstar, SonyLIV, Voot, and TVFPlay. It is based on the role Indian intelligence played in a series of real terror attacks that India faced over the last 19 years. This spy action thriller has eight episodes, each of which features real cases like the 2001 attack on the Indian Parliament, 26/11, Kashmir terror attacks, and more. It has an ensemble cast comprising Kay Kay Menon, Divya Dutta, Vinay Pathak, Karan Tacker, Sana Khaan, and Saiyami Kher. He has five agents under him living in various parts of the world. They all plan and plot to catch the mastermind behind the attacks. Kay Kay Menon plays the lead role.

Srikant Tiwari (Manoj Bajpayee) leads a dual life in this Indian web series. One is a middle-class man working as a government employee and the other of a spy with the National Investigation Agency. While protecting the country from grave terror threats, Srikant must also fill his stomach on roadside vada pavs, travel in a beaten-up Scorpio, and juggle his family life. The comical take on certain things in this show is what sets it apart from most espionage thrillers. The stars in this series are Priyamani, Sharad Kelkar, Neeraj Madhav, Sharib Hashmi, Dalip Tahil, Sunny Hinduja, and Shreya Dhanwantary Samantha Akkineni.

Recently the second season of Mirzapur broke the internet. It is among the best Indian web series on Netflix, Amazon Prime Video, Disney+ Hotstar, SonyLIV, Voot, and TVFPlay in the gangster genre. It tells the story of two nobodies who go against the most powerful family in the town of Mirzapur. It features Divyendu Sharma, Ali Fazal, Pankaj Tripathi, and Shweta Tripathi in pivotal roles. Two seasons have been released so far, and based on the climax of the second season seems like there’s a third one coming. The main star cast  Ali Faizal, Pankaj Tripathi, Divyendu, Rasika Duggal.

No.6 The Pitchers (TVF Play)

One of the older Indian web series on this list is a masterpiece created by The Viral Fever. Titled TVF Pitchers, this show revolutionized how we consumed short-format content in India, without the frills of a theatrical plot, subplots, and complicated characters. The mini-series follows the story of four men who quit their well-paying jobs to run a start-up. It documents their ups and downs and the consequent hilarity of life. Streaming on TVFPlay.

Another brilliant Indian web series on Netflix, Amazon Prime Video, Disney+ Hotstar, SonyLIV, Voot, and TVFPlay is this Anushka Sharma production. When Paatal Lok was released, it almost immediately attained hit status and joined the best Indian web series of all time. This show will open your eyes to your privileges and split open the class system that is so deeply embedded in Indian society. This TV series has given us characters that will always be a part of our country’s pop culture. Be it Hathi Ram Chaudhary or Hathoda Tyagi. We can’t recommend this show enough.

Among this list of the best Indian web series on Netflix, Amazon Prime Video, Disney+ Hotstar, SonyLIV, Voot, and TVFPlay, Asur is quite different due to its mythological nature. The story’s plot begins with the sudden death of a priest in front of his teenage son. Cut to 11 years later, and a forensic expert receives an unknown location from a mysterious source. Upon reaching the location, he finds a completely mutilated, tortured, and charred body. Now, the cops must find the culprit of this cold-blooded murder. But something tells them they’re not dealing with human forces here.

The Kota Factory is India’s first black-and-white web series, among all the shows on Netflix, Amazon Prime Video, Disney+ Hotstar, SonyLIV, Voot, and TVFPlay. It is available to watch on TVF Play, but you can also watch it on YouTube. It follows the life of Vaibhav, a young IIT-aspirant, and his life in Kota. Jitendra Kumar plays Jeetu Bhaiya, a teacher at Vaibhav’s institute whose guidance leaves a significant impact on the students. Created by Saurabh Khanna, the show not only focuses on the struggles that the young minds go through at these coaching centers, but it also takes us through the cherishable moments of a student’s life when they make new friends and fall in love.

By now, you may already be familiar with Jitendra Kumar’s acting chops. After delivering a hit alongside Ayushmann Khurrana, Jeetu, as he is fondly known among fans, returned to his roots by headlining a web series mainly produced by The Viral Fever, aka TVF. This tells the story of a 20-something who moves to a remote village in UP where he’s got a job as Panchayat Secretary. From desperately trying to get out of the village to develop a liking towards the people around him finally, Panchayat is a series that you can watch with family.

Based on research, here is the list of the top 10 Indian Web Series. We have classified these series based on their popularity, downloads, IMDb rating, and many more details in this list. In this list, Scam, 1992 is ranked in the first position. This is the most famous and best Indian Web series.

Please stay connected with us for further updates. We will be keeping you updated from time to time.

Published in A to Z and Education