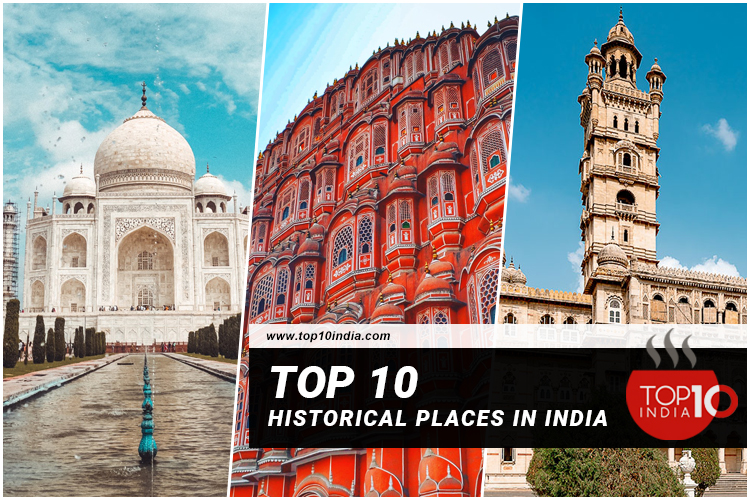 Top 10 Historical Places in India: India has been a country with a very great and rich history. In ancient times when Kings ruled the country, they constructed many different and unique monuments. In India, many ancient temples and forts were constructed very beautifully. And now these monuments and places have become tourist attractions. People from India and other countries visit these ancient places to experience the beauty of ancient times.

India is a very great and majestic country. Each state in India has its own historical place. That was built in ancient times. Some monuments were built in the memory, and some for love. In India, there are many great historical places that everyone should visit once. Here is the list of the Top 10 Historical Places in India.

Taj Mahal is ranked at 1st position in the List of Top 10 Historical places in India. It is also considered the symbol of love. Taj Mahal is located on the banks of the river Yamuna. It is a white marble structure that was made on the order Of Shah Jahan. Shah Jahan ordered to build it in the memory of his wife, Mumtaz. It is believed that Shah Jahan has cut off the hands of all the workers who built the Taj Mahal. Taj Mahal is the most beautiful monument in India. Taj Mahal is also ranked in the list of 7 Wonders of the World. It took almost 22 years to complete this immense monument. In India, everyone wishes to visit the Taj Mahal once in their life.

Hawa Mahal is one of the most popular places in India. Hawa Mahal is a crown-shaped building that consists of many tiny windows. The Maharaja Sawai Pratap Singh built it in the year 1799. The building was given crown shape because Pratap Singh was a big devotee of Lord Krishna. It is believed that it was built for the female of royal families because they were not allowed to roam out.

Laxmi Vilas Palace is a very great palace in Baroda. It was built by order of the Gaekwad family, which once ruled the state Baroda. It was built in the most used structure of British architects – Indo-Saracenic architecture. The main architect of this great palace was Major Charles Mant. The interiors of this palace were based on European designs. In the year 1990, Samarjitsingh, the grandson of Pratap Singh, renovated the Golf course in the palace and made it public. Th

The Golconda Fort was built to protect Hyderabad from the assault of foreign armies. The place was also considered the sector for diamond mining. This fort consists of 4 different palaces, and the outer wall of this fort is about 10 km. Long. The main entrance of this fort is known as Bala Hissar Gate, which is located on the eastern side. The fort also contains the Tombs of Qutub Shahi Kings.

Bara Imambara is the most popular Imambara area in Lucknow. It is also known as the ‘Asfi Mosque.’ It was built by Nawab Asaf-Ud-Daula. It also consists of many things like – the Asfi Mosque, the Bhul-bhulaiya, and Bowli, a stepwell with running water. There are 2 entrances to reach the main hall. The structure of Bara Imambara was inspired by the Mughal’s design. Delhi architect Kifayatullah designed it.

Chittorgarh fort is considered the largest fort in India. The fort is built at a hill at 180 m, and the whole fort covers about 691.9 acres. There is a total of 7 gates in the fort. In the 7th century, the fort was controlled by the Mewar Kingdom. Many battles were fought between several kings to win this fort.

Rani ki Vav is a subterranean stepwell constructed in Gujarat, India. Rani ki Vav is a great example of the work of architecture. The architecture’s complex technique and great beauty make it more appreciating. It covers about  65 meters in length, 20 meters in width, and 28 meters in depth. Rani Ki Vav is divided into 7 levels, and there are 212 pillars in the stepwell.

2. How many historical places are present in India?

There are almost 100 historical places in India because India has a very great and rich history.

3. Which is the most beautiful monument in India?

Taj Mahal is the most beautiful monument in India.