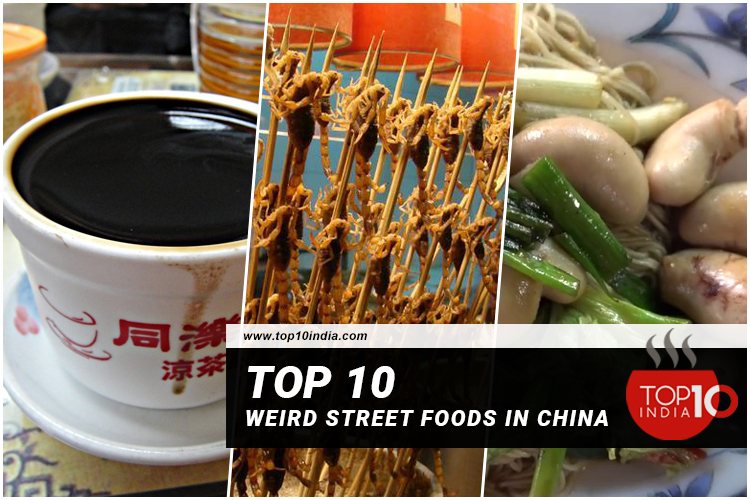 China has one of the largest varieties of food in the world. Walk down any street market in China, and you’ll find delicious delicacies, tourist treats, and even the downright disgusting. Some of these dishes are known for their tastes, uniqueness, and others for their medicinal purposes. These delicacies can be made from animals, plants, insects, and just about anything else. The saying must be true, “The Chinese eat everything with four legs, except tables and chairs, and everything that flies, except airplanes.” So, look at the top 10 weird street foods in China and the 10 most popular most famous street foods in China.

Turtle Jelly or tortoise jelly, also known as Guilin Gao, is a Chinese jelly-like dessert. It is traditionally made from various types of turtle’s bottom shell and several herbal products.

Seahorse is one of the cutest small marine fish found in the sea, but it is also found on China’s streets as a snack. Seahorse has a squid-like consistency and is very salty.

KFC offers several types of chicken on the menu, but you’ll have to search other places in China to find chicken testicles.

Tuna eyeballs are traditionally cooked with soy sauce and herbs. Some prefer them battered and served with vegetables and hot sauce. They can also be eaten raw, although caution should be taken when doing so as they may contain bacteria.

These small scorpions are fried and served on a skewer stick. They can be found on the streets of popular cities to lure tourists into trying something local and bizarre.

One of the more controversial bizarre foods the Chinese eat is bird’s nest soup. This famous soup is made from a swiftlet’s actual nest.

Pi Day, also known as century egg, is a traditional Chinese food that boasts a unique color and fragrance. It is usually a duck or chicken egg preserved in clay, ash, salt, and alkaline material.

Sheep penis and other animal penises and testicles serve as a remedy for that problem. Guolizhuang is dedicated to serving all types of dishes with animal genitalia in China, such as sheep gonads on a bed of curry and steamed sheep penis.

Silkworms can be found in local markets cooked several ways or stocked frozen and canned. Chinese-style silkworms are added to stir-fry with your favorite vegetables, soy sauce, and seasonings.

Balut is a popular street food that can be found at many roadside markets. It may sound sickening to eat a partially developed duck, but this dish is considered a delicacy in many places such as China.

1. What is the most popular street food in China?

Turtle Jelly is the most popular street food in China.

2. What are the 3 most popular foods in China?

Turtle Jelly, Fried Seahorse, Chicken Testicles are the 3 most popular foods in China.

3. Which is the weirdest street food in China?

Sheep Penis is the weirdest street food in China.

4. Which is the most famous street food in China?

Fried Seahorse is the most famous street food in China.

Published in A to Z and Others