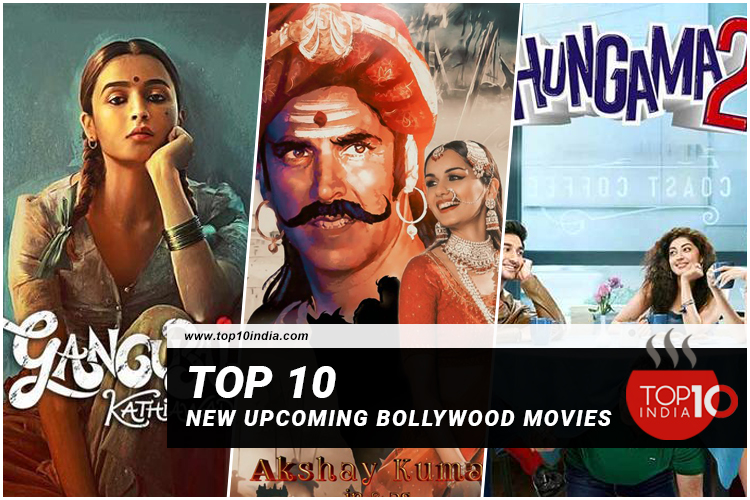 Top 10 New Upcoming Bollywood Movies: Bollywood is the nickname given to the Mumbai-based, mainstream Hindi language movies. Bollywood movies are famous for full-on drama, emotion, songs, and dance sequences. These movies connect themselves with the heart, history, social behavior, culture, and genre of its people. Being an entertainment industry, it has influenced Indian society and culture in different ways. Many of the country’s weddings, dances, and fashion trends are inspired by Bollywood.

Indian film industry produces about 900 movies every year and earns billion by selling tickets. Indians are the fan of watching new movies and eagerly wait for their release date, trailers, songs, etc. So, let’s move to watch out latest upcoming top ten Bollywood movies based on their popularity among the audience and release dates. Here are the movies-

Gangubai Kathiyawadi is a biopic of Gangubai kothewali, a girl sold at her young age in prostitution by Ramnik Lal (her suitor). The story is roughly based on the novel “The Mafia Queens of Mumbai” written by S. Hussain Zaidi. It’s the story of the struggle of a girl from Kathiawar and how she embraces the ways of her fate and turns that into her favor. The movie showcases the journey of a girl from being a prostitute to becoming a madam of a Kamathipura. The film depicts the struggle and strength of women against male dominant society.

Prithviraj is a movie coming from the Yash raj banner. It is a multi-starring big-budget movie. It is a time-based historical romantic, action, drama film. Prithviraj Chauhan was a great warrior, a fierce lion from Indian history. This movie showcases his strength, bravery, rivalry, and invasion by Md. Ghazni. His life motivates all men and women not to bow down before wrong. The movie is about the honor of Prithviraj and his famous love story with Sanyogta.

Hungama 2 is another upcoming movie in July. The movie marks the coming of Priyadarshan to Bollywood after his seven years of disappearance. One should not get confused, this movie is not the sequel of Hungama (2003), just the title is the same and the storyline has changed but the comedy and fun remain unlimited. More information about the movie lies below

Bell Bottom is a time-based, spy thriller movie. It has been said that it is based on the true events in the 80s-90s. Naseem Arora and Parwez Sheikh are the Writers of this movie, with production by Pooja Entertainment and Enmay Entertainment. It’s the first Bollywood movie that started its shooting after COVID-19. The movie shows the story of a spy and how he solves cases by risking his life in the process. Few more details of the movie are below-

Haseen Dilruba is an upcoming Bollywood movie that deals with solving a murder mystery. The movie is a thrilling mystery under the banner Colour Yellow Productions, T-series; Eros International. It’s the story of a woman named Rani Kashyap, who is the prime suspect of her husband’s murder. Under investigation, she reveals the thorny secrets of her married life that seemingly blurs the truth. The film says what seems good from one side is not the same on the other side. Truth has its perspective as the truth of one person may not be the same for the others. Further information about the movie is

Atrangi Re is the story of a married woman who happens to fall in love with another man having carefree behavior. The movie revolves around these characters. The movie is a love story with tempering humor. Atrangi re is a cross-cultural love story. It shows two stories of two eras running parallel in two different timelines. The film shooting was done in Bihar and Madurai. Few more details of the movie lie below

Jayesh Bhai Jordaar movie releasing this august is a social-comedy-drama Bollywood movie produced by Aditya Chopra and Manish Sharma. The movie is about a Gujarati man who believes in the equality of rights of males and females. Jayesh Bhai is an ordinary man who handles threatening situations in a very different way. The humor is the essence of the Films the film is a situational comedy. The comic timing

The most waited among new films is Amir Khan’s, Lal Singh Chadha. The screenplay of the movie is written by Eric Roth and Atul Kulkarni and the movie is produced by Amir Khan, Viacom 18 studios, and Paramount Pictures. It’s an adaptation or says remake of the American movie “Forest Gump” (1994) and this adaptation took 20 years. The film is about. Lal Singh Chada, an autistic man, who is having a great emotional understanding, unfolds the events of Indian history in his particular way. Film shooting has been done in more than l00 locations in India. More highlights of movies lie below

Dhaakad is an action-adventure movie. The film was about to release in November 2020 but due to the outbreak of the pandemic COVID-19, it’s now releasing in October 2021. The movie is a fierce-tough, action-adventure movie. Kangana will be seen in a different role or say in a different avatar doing tremendous actions in this movie. The movie is a full-on action-filled adventure with deadly scenes and guns blazing that won’t let you move from your place.

Q1. Which is the upcoming movie of Aamir Khan?

Ans. Lal Singh Chadha is the upcoming movie of Aamir Khan, which is said to be a remake of the Hollywood movie Forest Gump 1994.

Q2. What is the budget of Prithviraj?

Ans. 300 Crore is the budget of the movie Prithviraj starring Akshay Kumar and Manushi Chillar.