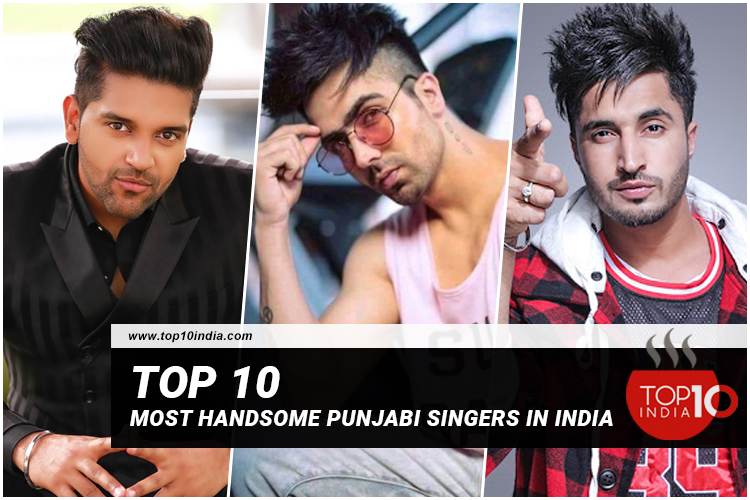 Top 10 Most Handsome Punjabi Singers In India: Guru Randhawa is the number 1 most handsome Punjabi singer in India who is very popular and liked in the Punjabi music industry for his fabulous voice. Talents in which all the requirement of an artist is united is scarce. Beauty with good vocals is one of the main desirable attributes of a good singer. Punjabi Singers have talent and are handsome. True natural gifts of high vocal voice and strength of the tongue for singing for hours are rested only with Punjabi singers.

Guru Randhawa is a talented, handsome Punjabi singer. His hard work and fantastic work make him come to the most famous voices in India. He started his career with a small stage performance in Delhi. He started his career with the song ” same girl” with Arjun Coomaraswamy. In 2015, he collaborated with the T series with the theme “patola, “which was the turning point in his life.

Harrdy Sandhu is a Punjabi singer. He performed his first song as my name is Harrdy Sandhu, whose music director was V-Grooves for sony music. He was an ex-cricketer who played for the U-19 world cup due to his elbow injury forced him to give up cricket, and after that, he focused on his singing.

Punjabi Singer Jasdeep Singh Gill, is also known as Jassie Gill. He is handsome, a stellar professional, and passionate about singing. He debuted with the song “Churiyan” album Batchmate in 2011. Jassi Gill has 7.3 million followers on Facebook and 8 million followers on Instagram.

Parmish Verma is a Punjabi singer, director, and actor who got a legacy from his father, who is a theatre artist. He is self-disciplined and motivated towards physical health. He has one of the best physical bodies in the Punjabi film industry. He debuted with the movie Rocky Mental in 2017. He is admired for his looks by his fans.

The famous Punjabi Singer Diljit Dosanjh debuted with Da Uda Ada in 2004 with Finetone Cassettes, a division of T-Series that became a hit all over the country. He has an attractive face and good reflexes. He performed stunts in a few movies. He never uses his body double. He always fills ideas in his mind and keeps practicing his vocal exercises daily to maintain his voice.

A tall and handsome Punjabi singer is Gurmukh Singh, also known as Garry Sadhu. He inherited his incredible height and has a perfect build body. Garry Sadhu has 3.6 followers on Instagram and 3.3 million followers on Facebook, debut with the movie Romeo Ranjha in 2014.

Punjabi singer Ninja, as the name says, his physical appearance is like Ninja, well-maintained body. He is very insuring to youngsters among few personalities in the Punjabi music industry who made his elegant personality through hard work and maintaining a proper diet. He once weighed 130 kg. With hard work for three years, he got down his weight and has a solid physical body.

Mankirt Aulakh is an elegant and charming Punjabi singer. He has an interest in Kabaddi and Wrestling. The Haryana-born handsome singer is very famous among the female audience in India. His appearance has attractive brown eyes and a vast physical structure which is very inspiring among the male audience.

A young and charming Punjabi singer Jass Manak was born in 1999. At a young age, he attracted many female audiences. He debuted with the song “U-turn” in 2017. His notable work as a songwriter can be seen in the song ” Prada” and ” Lehenga.”

No 10. Jazzy B (Top 10 Most Handsome Punjabi Singers In India)

Jaswinder Singh Bains, popularly known as Jazzy B is a handsome Punjabi singer. He is a brand, well-known personality who has a fan following not only in India but also abroad. Even though he is older than the singers mentioned above, but he still maintains a strong personality; his hairstyle and dress code are considered as best among Punjabi singers.

Who is the most handsome singer in India?

Jazzy B is the most handsome singer in India.

Who is the No 1 singer in Punjab?

Guru Randhawa is the number 1 singer in Punjab.

Who is the best Punjabi singer in India in 2021?

Diljit Dosanjh is the best Punjabi singer in India.

Who is the richest Punjabi singer in India in 2021?

Parmish Verma is the richest Punjabi singer in India in 2021.