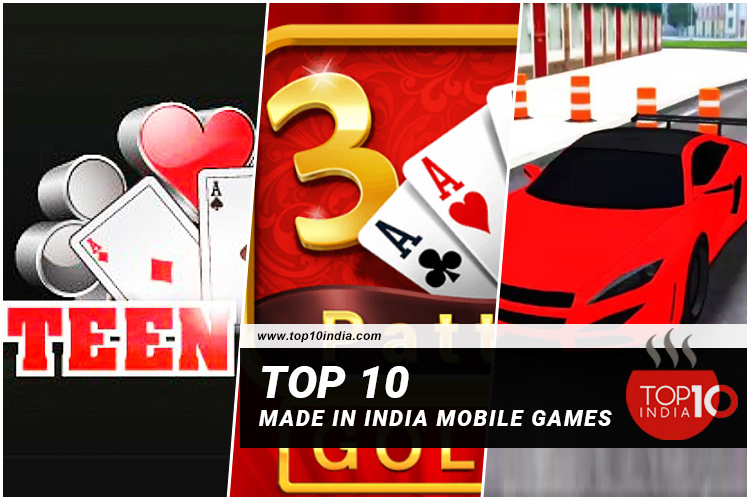 Top 10 Made In India Mobile Games: The Real Teen Patti that Red Monster Games had developed is the number 1 made-in India mobile game whose genre is gambling. The digital market for the mobile games of India has always been very dynamic. The preference of the gamers of the country changes, but they still opt for some common games. It has been observed that Indian Gamers are more inclined towards games of genres of gambling and sports.

Top 10 Made In India Mobile Games

Gaming was previously seen only as a time pass activity, but now the gamers are earning monetary returns and reputation on international levels. From entertaining to earning these games also give you a terrific experience, especially when you are bored. If you are interested in playing some, here is the list of the top 10 made-in-India mobile games.

The developer of Real Teen Patti is Red Monster Games. Red Monster Games is evidently a smart gaming company as it designs the games, keeping the need of the games required by the customers in the Indian market. The company tried its hands in the market by hitting the market with casino games; when the results were favourable, it extended and got into other social gaming genres, including the original IP-led games.

The developer of Teen Patti Gold is Moonfrog Labs. The game was published in 2014. The interesting fact is that the game developer is a Bangalore-based startup that designs and created mobile games exclusively for the Indian market. The developers who previously had work experience of various projects with organizations like Zynga on various titles were the founder of the Moonfrog Labs.

The Parking Frenzy is a game that Games2Win.com develops. Serial entrepreneurs Alok Kejriwal and Mahesh Khambadkone, who also are gaming technocrats, are the company’s co-founders. The game was published in 2012 and has earned millions of players. The company is headquartered in Mumbai, India. The genre of the game is “Parking.”

99Games is the developer of Dhoom:3 The Game. The developer of this game is an indie studio located in Karnataka that has been successfully developing and publishing mobile games. 99Games holds a good position in the market as it owns various global awards and has 20 million downloads and 12 game titles. Dhoom:3 The Game was published in 2013 and has a racer genre. The game is designed after the release of the movie Dhoom:3.

The game Real Cricket 14 is developed by Nautilus Mobile, which is a game development studio. The studio consists of former Gameloft employees. A popular game developed by this studio is Song of Swords that even has won the People’s Choice Indie Game of the Year award in 2013. Real Cricket is of genre sports and was launched in 2014.

GSN Casino-Free Slots is a developed game of GSN games that was published in 2015. GSS Games is a well-known and reputed Indian game development studio. It is a well-established gaming company with two top 10 grossing iPad apps and nine offices around the world. Sony Pictures Entertainment and DIRECTV are the game owners as the game is part of GSN games, and GNS is owned by them only. This game belongs to the genre of gambling games.

The game Bingo Bash is developed by GSN.com and was published in 2014. The genre of the game is gambling. Digging more about the game, we will find that Bingo Bash is a game featuring traditional music and is a bingo-style game. The game consists of  350+ levels and 50+ ways to play. Additionally, every two weeks, new bingo rooms are added.

Which is the number 1 mobile game in India?

Real Teen Patti is the No 1 mobile game in India.

How many mobile games India made?

Which is the best game made in India?

Real Cricket 14 is the best game made in India.

Published in A to Z, Electronics, Entertainment, Gadgets, News, Others and Social