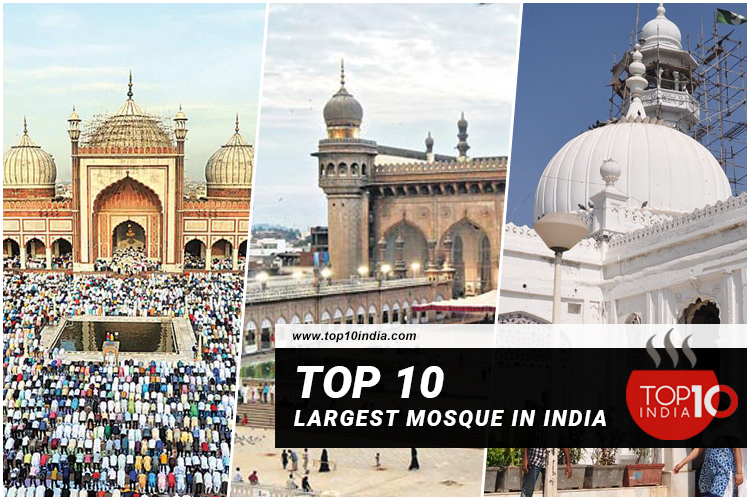 With over 204 million Muslim population, there are hundreds of workshop places known as Masjid or mosques in India. India also has more mosques than any other nation worldwide. Many famous rulers and emperors construct these to represent their reign and devotion to the almighty god.

The Masjid-i Jehan Numa, commonly known as Jama Masjid of Delhi, one of the largest mosques in Delhi. Also one of the largest mosques in India. It was built during the reign of Shah Jahan between 1650 and 1656 by the first Imam Syed Abdul Gafoor Shah Bukari. Jama Masjid is situated in the then known capital of Mughals Shahjahabadtoday, known as Old Delhi. It served as a principal mosque of the Mughal emperors until the invasion of Britishers. The Jama masjid was regarded as a symbolic node of Islamic power; It was also a site for political significance during several key periods of British rule in India. It remains in active use and is one of Delhi’s most iconic sites maintained by the Govt. of India.

Makkah masjid or Mecca Masjid is a mosque situated in the city of Nawabs  Hyderabad, India. It is one of the largest mosques in India, with a capacity of 10000 people. The mosque was built between the 16 and 17th centuries. It is a primary mosque for the old Hyderabad, and it is closely located to the historic landmark of Charminar, Cowmahalla Palace, and Laad Bazaar. Muhammad Quli Qutb Shah, the fifth ruler of the Qutb Shahi dynasty, commissioned bricks to make their mosque from Mecca’s soil the holiest site of Islam.

The Haji Ali Dargah is the mosque of Pir Haji Ali Shah Bukhari located off the coast of Worli in southern Mumbai. It is a perfect example of Indo-Islamic architecture, associated with legends about doomed lovers. Bukhari was a Sufi saint and a wealthy merchant from Uzbekistan. Near the heart of the city, the dargah is one of the most recognizable landmarks of Mumbai.

The Moti Masjid is a white marble inside the Red Fort complex in Delhi, India. When translated in English as “Pearl Mosque,” the word is situated in the west of Hammam and close to the Diwan-i-Khas. The Mughal Emperor Aurangzeb built it from 1659-1660 in the memory of his second wife, Nawab Bai. It was constructed at Rs 160,000. Also, a small mosque by the same name was built for private prayer by Aurangzeb’s son, close to the Ajmere Gate of the dargah.

The Nakhoda Masjid is the principal mosque situated in the city of culture Kolkata in the Chitpur area of the Burrabazar at Zakaria Street and Rabindra Street. The mosque was built as an imitation of Mughal Emperor Akbar at Sikandra, Agra, by Kutchi Memon Jamat, a small Sunni Muslim community from Kutch. The foundation stone was laid in September 1926. The total cost incurred for the construction was 15,00,000 Indian rupees in 1926.

The Kabuli Bagh mosque is a mosque in Panipat constructed in1527 by the emperor Babur to mark his victory over Sultan Ibrahim Lodhi of Panipat in 1526. It was named after Babur’s wife, Kabuli Begum; It is located in the Kabuli Bagh Colony, Panipat district, at a distance of a kilometer from Panipat town. It was built to show the victory of the Mughals.

The Charminar meaning four minarets, was constructed in 1591. It is s monument and mosque located in Hyderabad, Telangana, India. The landmark is known globally as a famous symbol of Hyderabad and is listed among the recognized structures representing Mughal architecture in India. Charminar is also a place known for celebrating many festivals, such as Eid-ul-Adha and Eid-al-Fitr.

Jamali Kamali Mosque is also a tomb located in the archeological village complex Mehrauli, Delhi, India. A monument comprises two monuments adjacent to each other, a mosque, and the other is the tomb. Their name is tagged together as they are buried adjacent to each other. The mosque and tomb were constructed in 1528 -1529, and Jamaliwas buried in the tomb after his death in 1935.

Ajmer Sharif Dargah, Ajmer Sharif Ajmer Dargah or Dargah Sharif is a well-known Sufi dargah of the  Sufi saint Moinuddin Chishti, situated in Ajmer, Rajasthan, India. The dargah also has the grave or maqbara of Chisti. Moinuddin Chisti was a 13th-century Sufi saint and philosopher, Born in Sanjar, presently known as Iran.

The Sunehri Masjid or Golden Mosque is a mosque in Old Delhi. It is located near the famous Sis Ganj Sahib Gurudwara in Chandni Chowk. Once, it was an imperial street leading to Red Fort. Roshan-ud-Daula Zafar Khan constructed the mosque. It is not to be confused with Lahore’s Sunehri Masjid.

1. Which is the largest mosque in India?

Jama Masjid is the largest mosque in India.

2. Which is the most popular mosque in India?

Ajmer Sharif Dargah is the most popular mosque in India.

3.Which mosque was constructed with the soil from the holy place of Mecca?

Mecca Masjid was constructed with soil from the holy place of Mecca.

4. Which mosque is famous globally?

Published in A to Z, General knowledge, Others, Social and Sociology & Society