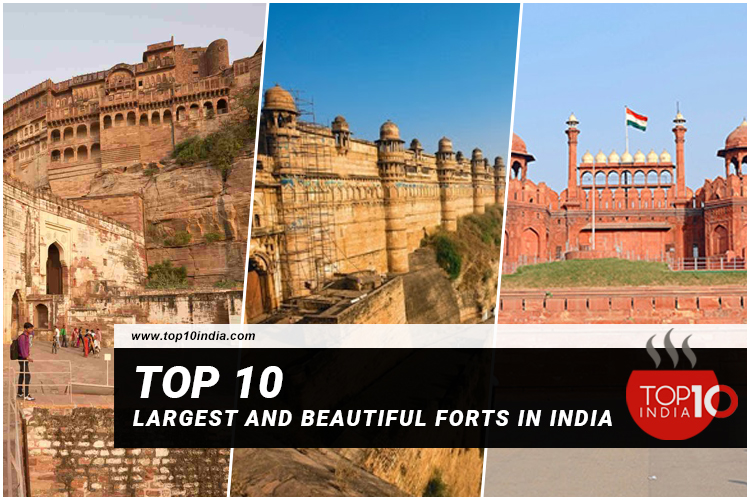 Top 10 Largest And Beautiful Forts In India: Mehrangarh Fort in Jodhpur, Rajasthan is the number 1 largest and beautiful fort in India that has become the no 1 tourist attraction fort in India too. We can all agree that magnificent kings have born in India with royalty as a heritage. Since 1947, when India became an independent and democratic nation, every king’s reign has come to an end. But what we still have are their royal and enthralling possessions, such as India’s iconic forts. Almost every state in India has a powerful fort that dates from a distinct historical time and is built in a different architectural style.

The forts in India now represent the fact that the country was formerly dominated by powerful monarchs and princes. India, as we all know, has a long and rich history, and it is a treasure trove of architectural marvels. The enormous forts have seen great monarchs and intense conflicts that shaped ancient India’s hearts and souls.

It’s no surprise that these forts reflect the tale of our country’s illustrious past and contribute to its tourist appeal. These forts in India can enable you to connect with former rulers’ glories, victories, and crushing defeats. We’ve compiled a list of the top 10 largest and beautiful forts in India that you should see.

Mehrangarh Fort, at 410 feet above sea level, is one of our country’s largest forts. Mehrangarh Fort was built by Rao Jodha circa 1459 and oozes regal splendour. It is a gigantic edifice in Jodhpur that spans over 1200 acres. The fort has been meticulously restored and now stands in all of its magnificence. The World Sacred Spirit Festival and the Rajasthan International Folk Festival are two significant festivals that take place here.

Gwalior Fort, perched on a hilltop, is a spectacular landmark and the longest fort in India that dates back to the 10th century. However, there is no definite evidence as to when it was built. Suraj Sen is said to have erected the fort and named it after a saint who cured his leprosy. The Hunas, Tomars, Mughals, and Marathas all took control of Gwalior Fort in later years.

The Red Fort is one of the most famous structures in New Delhi the capital city, with a history that dates back to the 17th century. It is known as the Lal Qila because it is composed of red sandstone. The fort is octagonal in design and covers 254 acres of land. When the Mughal capital moved from Agra to Delhi in 1639, Shah Jahan began building on this iconic edifice. The Red Fort was the epicentre of Mughal power and the focus point of all political intrigue in the empire.

This fort’s visual attractiveness and architectural style are two features you’ll appreciate. The construction, which is formed of red sandstone and marvels, is so magnificent that it is one of India’s most visited forts. The Sheesh Mahal, Deewan-e-Aam, Deewan-e-Khaas, Sukh Niwas, and Jai Mandir are just a few of the sights to see while you’re here.

We know who sprang to your mind when the name Jhansi was mentioned. You guessed correctly. Rani Laxmi Bai, the valiant queen of Jhansi, used to live in this fort. Every child in Jhansi knows about her legends of how she struggled for her dignity and nation.

Chittorgarh, also known as Chittor Fort, is one of India’s largest forts, covering 692 acres. It is located on a 180-meter-high hill that rises from the Berach River flats. It was once the capital of the Mewar kingdom and is home to a number of temples, palaces, gates, and two towers. The fort has been designated as a UNESCO World Heritage Site and is under the protection of the Archaeological Survey of India.

The Golconda Fort, built in the 12th century, is one of Hyderabad’s most prominent tourist attractions. It is located on the city’s outskirts and entices visitors with its majestic grandeur. The massive fortification was built under the sponsorship of the Kakatiya Dynasty in the 12th century. Various Qutub Shahi emperors restored it in the 16th century.

Jaisalmer Fort, one of the world’s few live forts, and the best fort as a tourist attraction wins for its beauty and majesty. Rao Jaisal constructed the fort in 1156, and it is the most attractive landmark in Jaisalmer. It is a UNESCO World Heritage Site in the Rajasthan Hill Forts category. This magnificent fort rises on a hill and has four gates, one of which is guarded by a cannon.

Kangra Fort, Himachal Pradesh’s largest fort, was constructed by the Katoch Dynasty’s emperors. The monument is also claimed to be around 3500 years old, making it the oldest in our country. Kangra Fort is the sixth-largest fort in India, spanning 463 acres of land. It is home to a museum with artefacts dating back to the nineteenth century. Even today, the sacred shrines of Ambika and Lakshmi Narayan, as well as a few other shrines, may be viewed.

At 500 feet above sea level, Jaigarh Fort, among the Top 10 Largest And Beautiful Forts In India, offers visitors an exquisite perspective of the surrounding area. It was built by Jai Singh II to keep an eye on the adjoining Amer Fort, which served as the kingdom’s lifeline. Both of these forts are connected by complicated passageways that were formerly used to safeguard the kingdom against foreign invasions.

Which fort is the largest fort in India?

The Chittor Fort, also known as Chittorgarh, is one of India’s largest forts.

Which is the most beautiful fort in India?

Red Fort in New Delhi is the most beautiful fort in India.

Which Indian State has maximum forts?

Rajasthan has maximum forts in India.

Which is the third largest fort in India?

Red Fort is the third-largest fort in India.