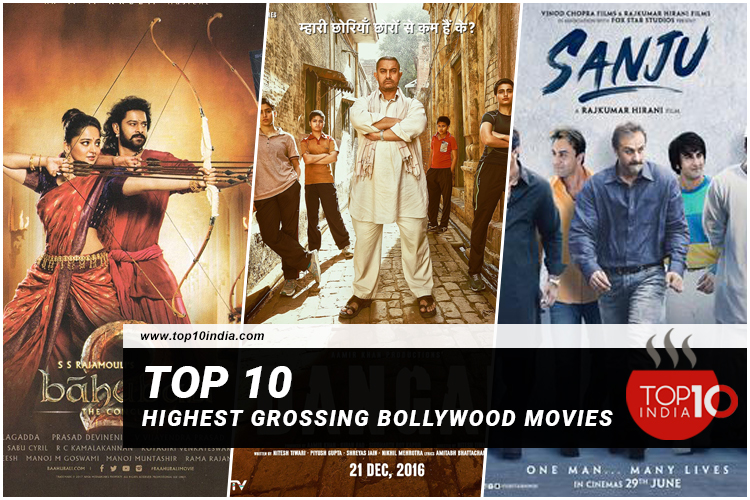 Top 10 Highest Grossing Bollywood Movies: Bollywood is an irreparable part of one’s life, especially in India. Every Friday is looked forward in the wait of the releasing movies, here movies are not just treated as an art form but are lived and just like cricket is is a religion. Breaking records of 300 or 500 crores group, the industry has witnessed immense growth in the past decade.

We experienced some path-breaking and unconventional movies taking over Bollywood. Waving bye-bye to some old cliche movies, and the audience is accepting the new age movies and stories with open hearts, arms, and pockets. Bollywood has seen the highest-grossing movies of all time, especially in the second half of this decade. Let’s have a look at the top 10 highest-grossing Bollywood movies.

No.1 among the highest-grossing Bollywood movies is Baahubali 2: The Conclusion. Not actually being a Bollywood movie has never affected its popularity to reach great heights, and it has done wonders to the Indian box office. The magnum-opus mythological drama is made with a budget of ₹250 crores. With the suspense left in the 1st part about “Why did Katappa kill Bahubali?” this sequel broke all box office records. It has successfully earned the position of highest-grossing Hindi film of all times.

The movie was inspired by the life of two sisters who were Commonwealth gold-medalist. Mr. Porfectionist Aamir Khan in the role of an uplifting and hardworking father to Geeta and Babita Phogat who’s roles were brilliantly played by Fatima Shaikh and Sanya Malhotra respectively. Dangal was all about a father making his daughters fulfill his incomplete dream of winning gold for the nation. Making Dangal the second highest-grossing movie in Bollywood. The movie went on to receive many awards at the 62nd Filmfare Awards. With a strong message and a very well scripted storyline, the movie and the cast won over the audience with their brilliant performance.

Rajkumar Hirani never disappoints the audience and gives them the delight to watch the best creations. Next in line is Sanjay Dutt’s biopic, Sanju, and the lead role played by Ranbir Kapoor. The movie narrates the real-life, controversial story of megastar Sanjay Dutt depicting his lowest lows and highest highs. The combination of Rajkumar Hirani’s brilliant story-telling and stunning performance by Ranbir Kapoor made Sanju one of the most loved movies of the year.

From controversial to comedy entering is the other film starring Aamir Khan. Helmed by Rajkumari Hirani, PK is an entertainer but it also raised many thought-provoking questions. PK witnessed a lot of controversies due to its plot or story. In a nutshell, Aamir Khan plays a part of an alien who questions blindly followed religious beliefs and old traditions in our country, by the time it finds a way back to his planet.PK becomes the first film to enter the 300 crore club in the year 2014.

Sequels are in for this decade here we have another sequel to the blockbuster movie Ek Tha Tiger. Tiger Zinda Hai proved to be a great comeback of two super cops Tiger and Zoya played by Salman Khan and Katrina Kaif. movies starring Salman Khan with Ali Abbas Zafar’s direction was a total action-packed entertainer. It made a smashing entry in the 300 crore club and was loved by the audience.

Again we have another film starring Salman Khan enter the list with Bajrangi Bhaijaan. It is not easy for a person who is known for his romantic roles in earlier years of his career then shift towards action and now he undertook a whole together different look. Bajrangi Bhaijaan portrayed Salman Khan in a totally different light distinguishing from his usual roles in the direction of Kabir Khan. Salman Khan playing the role of simple Indian man, Pawan Kumar Chaturvedi is an ardent follower of Lord Hanuman. He crosses the border to safely leaving a little girl to her home. The story revolves around the struggles he faced while this journey. Bajrangi Bhaijaan became one of the most memorable roles of Salman Khan.

A hardcore action film WAR starring two hunks Hrithik Roshan and Tiger Shroff. The movie was a total delight for the fans of Hrithik and Tiger fans. Watching both Hrithik and Tiger flaunting their chiseled bodies in high-octane action sequences. The film was a huge box-office success as it was a complete package from drama, romance, to music it had served the right amount of everything. Sanjay Leela Bhansali never leaves the audience disappointed keeping this legacy he served the best action-packed movie to action lovers.

Another smashing entry of a well-deserved period drama by Sanjay Leela Bhansali Padmavat. The film featured Deepika Padukone as Rani Padmavati, opposite Shahid Kapoor as Maharawal Ratan Singh, also featuring Ranveer Singh as Alauddin Khilji. Bhansali is known for creating the best when comes to period drama, this also made extravagant film sets, costumes, and the finest actors. The film faced a lot of controversies and life-threatening protests even before the launch due to its name, plot, and relevance. But none could stop it from becoming one of the highest-grossing Bollywood movies.

Made another entry of Ali Abbas Zafar and Salman Khan collaboration that made to this list is Sultan. A classic tale about a wrestler’s journey is named Sultan Ali Khan. The film also includes Anushka Sharma as Aarfa in the love interest of Sultan. Total power-packed performances from both Anushka and Salman, this emotional drama hits the right chords with the audiences and made an evident mark at the box office.

After the success of both the previous part of the Dhoom franchise, Dhoom 3 made up to the chats with great response. In the action-packed thriller with Aamir’s double role as Sahir and Samar, they plan to attempt robbery in Chicago to take revenge for their father’s death. Inspector Jai and Ali played by Abhishek Bachchan and Uday Chopra on duty as they investigate the case. This brings the third Aamir movie to the list of the highest-grossing Bollywood movies.

1. Which is the highest-grossing Bollywood movie?

2. Which is the highest-earning movie in India?

Ans: Bahubali 2 is the highest-earning movie in India.

3. Who is the box office king in the world?

Ans: Salman Khan is the box office king in the world.