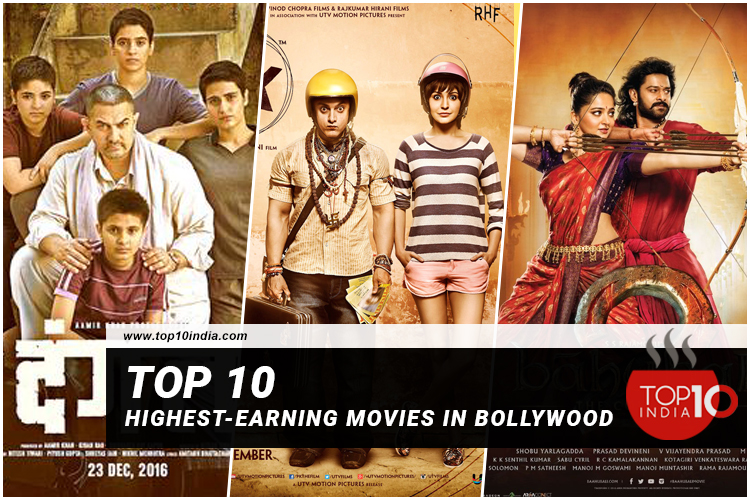 Top 10 highest-earning movies in Bollywood – Have you ever thought, what will happen if your work doesn’t pay off? It’s unimaginable. As we all know, Bollywood is a multimillion industry with a huge amount of money in it. It invests money by producing a film and earns profit after its release. An interesting audience pays good gross profit in return.

Here is the list of the top 10 highest-earning movies in Bollywood based on different sources. These movies have earned not only in India but abroad. So let’s see the listing-

Dangal, a 2016 released film based on the real-life story of Mahavir Singh Phogat, a former wrestler, who was unable to pursue his career as a wrestler. He wanted to fulfill his dream with his daughters Geeta and Babita. He trains them for the Common Wealth game, irrespective of the norms of society. This story also focuses on the father-daughter relationship.

PK 2014 released movie is a different kind of movie having a story about an alien, who comes to Earth for research work. As soon as he lands on earth, he loses his connecting device or remote in the hands of a thief, which he sold to a man called God-man. He meets Jaggu, a heartbroken journalist, and soon both become friends. They together try to find his remote. The process of finding remote in raises many questions on superstition and our beliefs which we are following in our society. The movie shows us that how people fool others in the name of God.

No.3 Bahubali 2: The Conclusion

Baahubali 2: The Conclusion, a movie released in the year 2017 is an action-adventure movie. This movie was long-awaited by its fans because it was going to answer an important question that everybody was asking “Why Kattappa killed Bahubali”. The movie shows the rivalry between the two brothers Mahendra Bahubali and Bhallaldev for the throne of Mahishmati. Where Bhallaldev conspires against Mahendra Bahubali and gets him killed by Kattappa. He captures his wife and puts her in chains. Many years pass and then his son comes to Mahishmati to avenge his father’s death. The movie has many outstanding visual and graphical effects making it watch over and over again.

Bajrangi Bhaijaan released in the year 2015 is a story of a simple man named Pawan, a pure soul, who is also a devotee of Lord Hanuman. He meets a speechless girl who got separated from her mother and he takes her home. When he came to know that the girl whom she named Munni belongs to Pakistan. He decides to take Munni home to Pakistan. His way to taking her includes many humorous and hilarious scenes. This movie promotes humanity above all religion and national boundaries.

Secret Superstar released in 2017, is a movie about a young girl Insia. She wants to become a singer but her father does not allow this, he is very strict even raises hands on his wife. But she had a strong desire to become a singer, so decides to post her song anonymously on the internet by covering her identity. She becomes a superstar with millions of fan followers. The film raises other issues like domestic violence and gender equality.

2.0 movie released in 2018, is a science fiction action movie. It is a sequel to the movie Robot (2010). The movie starts with, after the destruction of Chitti, Professor Vaseegaran has created Nila (another robot) who can understand feeling better. Then suddenly cell phones start flying out of the hands of people in Chennai city. Professor investigates it and thinks that it is the fifth element and he assembled Chitti once again in a better way to fight. But after locating the address of cell phones they came to know it’s a bird-shaped human Pakshirajan with supernatural powers. He was a former Ornithologist who came for Vengeance on cell phone and cell phone users.

No.7 Bahubali: The Beginning

Bahubali: The Beginning released in the year 2015, was a blockbuster movie and broke all the records of Hindi and Tamil language movies. The movie starts with a drowning child who was saved by nearby Tribes of the river. The lady of the tribe owns him and raises him as her son. He was called by the name Shiva. Shiva falls in love with a warrior woman. When she was trying to impress her, he came to know about his family legacy and conflict-ridden history. The movie seems like a canvas of its director where colors know what to draw; it’s a beautiful movie with beautiful scenes, action, and the mysterious history of Mahishmati.

Sultan released in the year 2016 is a movie in the sports drama category. The movie is about Sultan Ali Khan, a former wrestler, who becomes a wrestler for a girl Aarfa. She was a wrestler and in her love Sultan learns wrestling. He becomes very famous, earns gold in Olympics. But suddenly he gave up wrestling after the death of his newborn son and get separated from his beloved wife. Years later he joins wrestling to revive his career, get his pride and money which he needed to build up a blood Hospital in his village. The person feels connected while watching this movie.

Sanju was released in 2018, it’s the story of the life of Sanjay Dutt. He is the son of veteran actor Sunil Dutt and veteran actress Nargis Dutt. It was difficult for him to handle down the legacy of his parents which was handed over to him. The ups and downs in the life of Sanjay Dutt are shown in this movie from the first hit movie Rocky to addiction, to bombing, to his conviction, the dilemmas, and every other issue is covered in this film. The movie was a blockbuster with the acting of its lead characters.

Padmavati released in 2018, was famous before its release. The movie shows the glorious history of the Rajputs of Rajasthan. The story is about Queen Padmavati who is happily married to Raja Ratan Singh. Their life becomes unstable with the arrival of Sultan Alauddin Khilji, who wants the queen madly and declared war against them. He kills King Ratan Singh and the queen burns herself to fire with her maids to protect her dignity.

Q1. Which is the highest-earning movie of Bollywood?

Ans. The highest-earning movie of Bollywood is Dangal.

Q2. Is the movie Padmavat based on a real incident?

Ans. Yes, the movie Padmavat is based on a true-life incident of Rani Padmavati of Rajasthan.