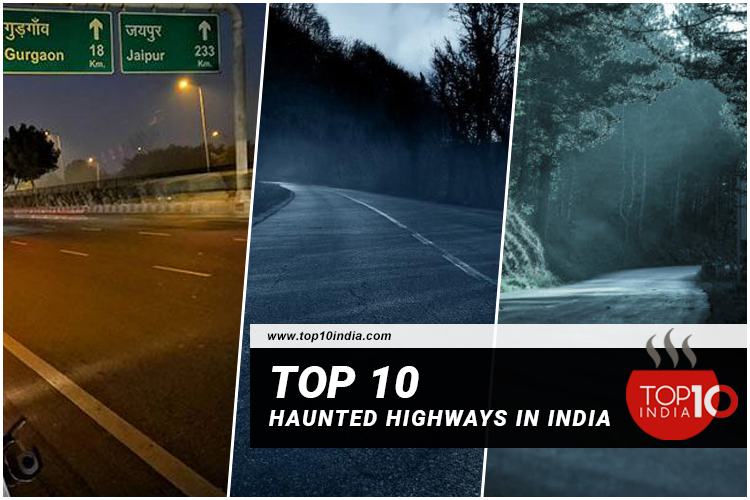 Top 10 Haunted Highways In India: Delhi Jaipur Highway is the number 1 haunted highway in India that has many scary stories behind its existence. Driving large distances is one of the best ways to discover new locations. Although these road trips take travelers on wonderful adventures through gorgeous locales, they must be well aware of the dangers that may exist along the way. India, like many other countries, has a number of haunted roads that can be found around the country. It is also our responsibility to keep you informed so that you can avoid certain roads while on the road.

Are you preparing to get in your car and do that long-awaited cross-country road trip? Hold that notion for a second and take a look at these national highways, which are sure to jolt your thoughts into action in no time.

People are often rejecting ghosts and spirits’ stories. That is, after all, fairly normal. According to research, a lot of people have been involved in car accidents while on road excursions for unknown reasons. These collisions occurred on routes that have a reputation for being haunted and cursed. Nobody knows why things go wrong on these routes! Take a look at some of the top 10 most haunted highways in India that you should avoid while traveling.

The haunting of the Delhi-Jaipur route begins with the fort of Bhangarh. This Fort is one of the country’s most haunted locations, which is located on this highway and is home to devils. These disgruntled spirits are reported to wreak havoc on the roads. All we can say is be cautious! Rajasthan’s Bhangarh Fort is said to be one of India’s most haunted locales, which is likely why the Delhi-Jaipur Highway is cursed.

On this route, people have encountered terrifying things that have no rational explanation. They claim that while crossing the fort, they can sense negative energy and strange phenomena that are beyond their comprehension!

If you enjoy taking long treks in isolation, Igorchem Road in Goa is a trail you should avoid. It is rumored that anyone walking here unarmed and alone will hear footfall other than their own, despite the fact that there is no one else around!

Not only that, while one could suppose that the route is closed to traffic just when the sun sets, locals avoid it even during the day. Make sure you don’t walk along this route between 2 and 3 p.m., as the chances of being possessed are supposed to be increased.

This is one Indian route where accidents are difficult to explain because they occur in the oddest ways. Some believe it is the work of a ghost, while others believe the route is cursed. A temple may be found on both sides of this road, and it is stated that if a vehicle does not stop and pray at both temples, he or she will have a fatal accident on the same route. Strange, but real!

Don’t go onto the Kashedi Ghat if you have seen Pari and were terrified of Anushka Sharma’s character. Many people have been attacked here, by witches who are hungry for flesh, meat, and blood. People who have traveled past this location have said that their cars abruptly came to a halt.

Those traveling from Mumbai to Goa may encounter Kashedi Ghat, a stretch of highway that should be avoided at all costs, especially at night. According to reports, the ghost of an unknown individual tries to stop automobiles driving over this stretch, and when they refuse, the car crashes.

Tamhini Ghat, which appears to be a magnificent wonder of nature made by God, is a hub for murders, thefts, and strange happenings. Because of the frequent disasters, the ghat is claimed to be haunted by ghosts and spirits intent on wreaking misery on the life of any vagabonds who chose to travel this path. Many people may dismiss these reports with a grain of salt, but we recommend that you avoid this road after dark since, as the saying goes, it’s way better to be safe than sorry.

The 2-Lane East Coast Road connects Chennai, the Gateway to South India, and Pondicherry, a haven for French architecture. To say the least, this route is creepy and prone to accidents. Drivers on this route have reported seeing a woman dressed in a white saree appear out of nowhere.

As a result of this unexpected arrival, the number of accidents on this route has skyrocketed. Not only that, but some have also reported that when the woman emerges, the temperature around them appears to decrease, giving them a chill down their spine.

Do you recall Veerappan? Isn’t he the renowned bandit, dacoit, and lootera known for his 30-year smuggling, abduction, and murdering career? Even if you’ve forgotten about this man, a drive along the NH 209, which runs through the Sathyamangalam Wildlife Sanctuary, will jog your memory. Screams have been heard and floating lights have been seen in the dark by passers-by. It is said that the dacoit himself travels through the sanctuary, haunting the road he previously walked.

When we think of real-life haunted stories, we can’t help but think of Bollywood movies, which have had a huge impact on our lives. Remember in Bhool Bhulaiyaa when Vidya Balan was possessed and lifted the bed with one hand?

The atmosphere of that film is eerily similar to Besant Road in Chennai and its legends. Besant Road, which is bustling during the day and dark and ominous at night, has a reputation for being haunted. People being smacked by nothingness hoisted up, and tossed into the darkness of the night!

In Tamil Nadu, a section of National Highway 209 (NH-209) passes through the Sathyamangalam Wildlife Sanctuary, which was originally home to the notorious bandit Veerappan. Although traveling on a road with forest cover is usually thrilling, this specific route is reputed to be one of Tamil Nadu’s most haunted locations. Locals and visitors alike have reported hearing loud cries, seeing floating lanterns, and other strange occurrences.

Some people say Veerappan’s spirit haunts this location. Veerappan, the famed Indian bandit who was murdered by police, liked to live in the woods. People claim to have seen hovering lights and heard strangers screaming while driving down the road. So, if you can avoid taking this road, please do so!

Travelers on Delhi Cantonment Road reported having observed a hitchhiking lady dressed in a white saree exploring the area. Residents say the road is haunted, and many are terrified of driving on it, especially at night. If you don’t stop the car, the lady will start running alongside you at the same speed! Isn’t it creepy?

The lush green region of the Delhi Cantonment area is truly lovely during the day and makes for a picturesque image, but things change at night. Because of people’s stories, the same route becomes a haunting stretch. If you don’t, on the other hand, she chases after your car, stops in front of it, and then vanishes.

How many Haunted Highways are there in India?

There are 10 haunted highways in India.

Which is the most haunted highway in India?

Delhi Cantonment Road, New Delhi is the most haunted highway in India.

Which is the number 1 haunted highway in India?

Delhi Jaipur Highway is the number 1 haunted highway in India.

Published in A to Z, News, Others, Social and Sociology & Society