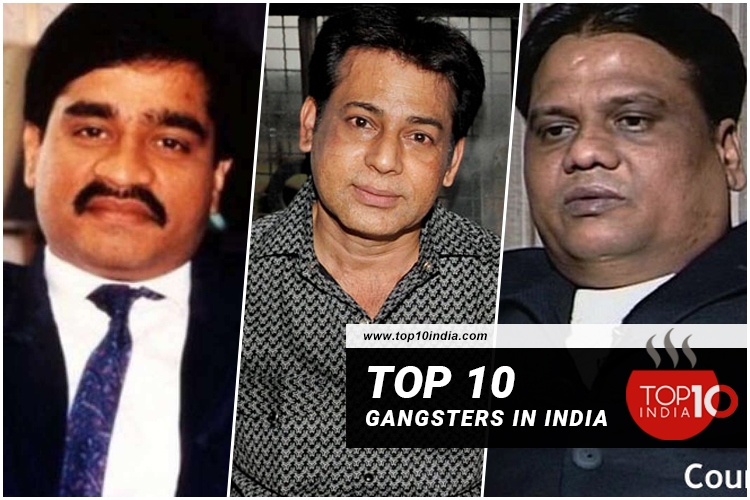 Top 10 Gangsters In India: Dawood Ibrahim is the number 1 gangster in India, a global terrorist, and mind behind protests, loots, and attacks in India. The ’80s and ’90s were an era that was filled with many notorious gangsters all over the country. These people were some of the most respected and feared people of their time. They have been involved in some of the most heinous crimes ever committed in India. These men were some of the most dangerous and ruthless men India has ever seen.

After the Mumbai police sprang into action in the 90’s many of these gangsters fled India or were either caught or killed in encounters by the police. So, let’s take a look at some of the top 10 gangsters in India.

Dawood Ibrahim is less of a gangster and more of a global terrorist. He is the boss man of the infamous D Company. He is also the most dangerous person in the world. Thus, Dawood Ibrahim is the number 1 gangster in India in 2021. It is alleged that he knew Osama Bin Laden and had ties to the terrorist organization Al-Qaeda. After fleeing India after the 1993 bomb blasts, he fled to Pakistan and hid there ever since.

The Pakistani ISI has been protecting him ever since. He entered the criminal world at the age of 14 and looted people by the age of 15.

Abu Salem is another big name in the history of the Indian underworld. He worked as a delivery guy for Dawood and delivered guns, money, and other illegal goods to people across Mumbai. He also allegedly supplied guns to Sanjay Dutt. Abu Salem was most popularly known for his connections with Bollywood. He allegedly financed many films and knew many celebrities as well. Amir Khan and Rakesh Roshan were also his targets at some point in time.

It is also alleged that he planned the murder of the T-Series music label founder Gulshan Kumar. He, too, was involved in the 1993 Mumbai bomb blasts.

Chota Rajan was the successor to Rajan Nair, aka Bada Rajan. After the death of Bada Rajan, he gained the title of Chota Rajan. He is a dangerous gangster in India 2021. Chota Rajan was born in a poor Marathi family in Chembur, Mumbai. In the 1980s, his criminal activities started after he started selling cinema tickets in black. Rajan progressed to stealing and eventually bootlegging liquor.

After the 1993 bomb blasts, Chota Rajan parted ways with Dawood and eventually became his rival. Chota Rajan was later arrested in Indonesia and deported back.

Tiger Memon is another notorious gangster who had ties with the underworld don Dawood Ibrahim. He was feared and was known to be reckless. He was famous for being a getaway driver for criminals looking to escape the Mumbai police and drove recklessly.

He was also a prime suspect in the 1993 Mumbai bomb blasts along with Dawood Ibrahim.

Vardarajan is one of the oldest names in the Indian underworld. He was also popularly known as Vardabhai by fellow gangsters. Vardarajan Mudalair came to Mumbai from a small coastal town in Tamil Nadu. He began his life in Mumbai as a porter at VT station. His criminal career started when he got into the business of bootlegged liquor.

Vardarajan Mudalair was one of the closest associates of the famous gangster turned producer Haji Mastaan. He fled to Chennai after the Mumbai police tracked down and encountered his fellow gang members.

Another associate of Vardarajan was the gangster turned film producer Haji Mastaan. He is known as one of the most influential gangsters in India as he carried out his illegal activities without ever actually killing anyone. Haji Mastaan, along with his father, ran a small cycle repair shop in the busy streets of Crawford market in Mumbai.

Haji Mastaan joined the Mumbai docks as a porter, where he eventually started smuggling goods. Thus his criminal career began. Haji Mastaan had powerful smuggling networks in Mumbai and along the Gujarat coast. He was known to be friendly and often helped solve disputes between rival gangs.

Among the Top 10 Gangster In India, Karim Lala was also associated with Vardarajan and Haji Mastaan. He entered the criminal underworld in the 1930’ after he came to Mumbai. He was the man that founded the notorious criminal organization called ‘The Indian Mafia.’

He was involved in jewelry smuggling, gambling rackets, extortion, and running liquor dens. Lala was known to be kind and generous to the poor and needy. Karim Lala was also one of the top rivals of Dawood Ibrahim and was also involved in gang wars.

Probably the most popular gangster in India is Arun Gawli. He is also known as ‘Daddy,’ and there is a film by the same name. He later turned to politics and used it as a cover to run his criminal activities. Arun Gawli was born in the Ahmednagar district of Maharashtra.

Arun Gawli criminal career started when he entered Rama Naik’s gang in the 1980s. He eventually became the gang’s head after Rama Naik was killed in a police encounter in 1988.

Ali Budesh is known for his extortions from many popular celebrities, builders, and other elite people. Ali Budesh, one of the Top 10 Gangster In India, started his criminal career by pickpocketing and quickly advanced to other offenses. He helped some of Dawood’s men to evade the police by providing them shelter in the slums of Ghatkopar.

Among the Top 10 Gangster In India, Chota Shakeel is another name associated with the Indian underworld. He was one of the people closely related to Dawood Ibrahim. He was a replacement for Chota Rajan and looked after the dealings of D Company. Chota Shakeel is also said to support the Pakistani ISI and is hiding somewhere in Pakistan.

Arun Gawli is one of the No 1 gangsters in India.

Chota Shakeel is one of the biggest gangsters in India.

Chota Rajan is the greatest don in India.

In the ’80s and ’90s, the state of Maharashtra had the most gangsters in India.

Published in A to Z, Crime, News and Personality