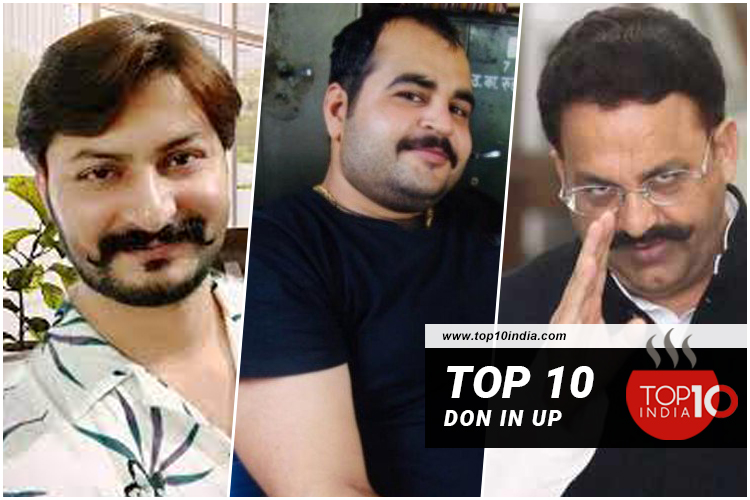 Top 10 Don In UP: Amit Bhura attains the number 1 position in the top 10 don in UP, as he is the most notorious gangster that the state has ever seen having started his criminal career with a robbery involvement. The state of Uttar Pradesh is no stranger to gangsters and criminals. The state has also seen some of the worst crimes in the nation. Most of these notorious gangsters have turned to politics to save themselves from the charges against them.

During the 1970s and 1980s, these mafia groups fought with each other which led to numerous deaths and fatalities. The reason for these fights was to assert dominance over coal mining projects, metal scrapping contracts, railway construction contracts, and PWD tenders. These led to the formation and rise of various gangs that terrorized the state of UP. Many powerful and ruthless gangsters emerged during this time. They got famous by the names of Dons are hereby we have them for your information in our list of the top dons in UP.

A very famous don in UP, Amit Malik is popularly known as ‘Amit Bhura’ in the western part of Uttar Pradesh. Amit Bhura’s criminal career started when he was jailed for involvement in a robbery along with some of his friends while in high school. After Amit Bhura was released from jail in 2002, he went ahead and murdered the person who filed the case of robbery against him.

Amit Bhura quickly became notorious after he murdered 3 other people who were his rival Dharmendrar’s, close relatives. Amit Bhura is known by this name due to his fair complexion, brown-tinted hair, and well-built physique.

While Sunil Rathee was on parole in 2016, he was greeted by a crowd of his fans outside his house. Sunil Rathee runs extortion gangs and has murdered several people.

The gang had clashes with other gangs for dominance over contracts for coal mining, railway construction, scrap disposal, and other public work. In 1995, Mukhtar Ansari entered politics through the student union and became an MLA in 1996.

From our list of the top 10 don in UP, Sunder Bhati is another notorious gangster in the UP and NCR region. Sunder Bhati along with gangster Naresh Bhati terrorized the NCR and western UP for a long time. Sunder Bhati is the most feared current don of UP 2021. Sunder Bhati entered the criminal world after murdering a man in 1993.

Since then, Sunder Bhati along with Naresh Bhati organized several extortions and murders across NCR and UP. Later due to some differences, the gang fell apart and Sunder and Naresh turned into bitter rivals. This rivalry ended in Naresh Bhati being killed by Sunder Bhati. Sunder Bhati was arrested in the year 2014.

Brijesh Singh is an MLA of Bhartiya Janta Party and represents the Deoband constituency. Brijesh Singh is a famous gangster turned politician who lands at the fifth spot in our UP don list. Brijesh Singh was also involved with the Mumbai mafia for some time. Brijesh Singh became feared after he killed 5 people who had murdered his father in a political rivalry in 1984.

Dhananjay Singh is another gangster turned politician who terrorized the state of UP. Dhananjay Singh studied at Lucknow University and gained popularity among the student unions. That’s when he entered the criminal underworld. Dhananjay Singh has also won several elections. Dhananjay Singh was mainly involved in murders, extortions, and political conspiracies.

D.P. Yadav or Dharam Pal Yadav is another gangster who later turned to politics. D.P. Yadav was the Member of the Legislature Assembly four times. D.P. Yadav was a common milkman who started selling bootlegged liquor to earn extra cash. Until the 1970s, D.P. Yadav3 has 9 murder charges against him.

It is alleged that in the early 1990s, D.P. Yadav’s bootlegged liquor killed almost 350 people. D.P. Yadav entered these politics to escape these charges and made many powerful friends. D.P. Yadav went on to form his party in the year 2007.

Atiq Ahmed is another gangster turned politician from the state of Uttar Pradesh. Atiq Ahmed has won the MLA elections 5 times to date. Atiq Ahmed entered the criminal world after murdering a person in the year 1979 when he was just seventeen years old.

Since then Atiq Ahmed was associated with several murders and extortions around the state of UP. There are several charges against Atiq Ahmed across the state.

Raghuraj Pratap Singh is the complete name of the gangster turned politician Raja Bhaiya. Extortion and murder is a common practice for Raja Bhaiya. Raja Bhaiya is also a very powerful politician and has won the MLA elections from Kunda, UP. Raja Bhaiya hails from the royal family of Badri’s in Oudh.

The best don in UP is Sunil Rathee.

Amit Bhura is the number 1 Don in the world.

Lucknow city is the most dangerous district in UP.

Published in A to Z, Crime and News