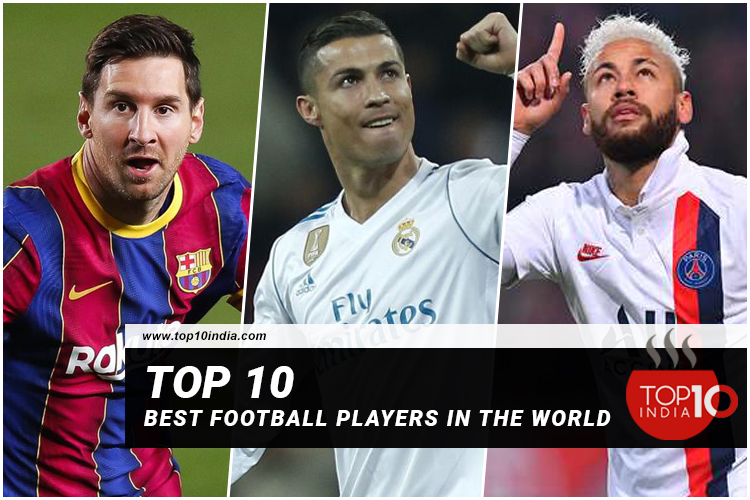 Top 10 best football players in the world:- Football is a popular game that pumps gushing adrenaline for excitement. It is an exciting game that unveils sudden changes during the biting nails moments. It is a universal game that involves big and small nations ever. Football is a game that teaches us the importance of sportsmanship, unity, teamwork, and leadership. It is a game that relieves stress, teaches discipline, calms, and relaxes.

In this list, we have mentioned the Top 10 best football players in the world. Although there is no one correct answer, most of the players on this list have been objectively the best players in the world this past season. These players were placed in the position according to their past performance due to constant fluctuations in form as well as the fact soccer stopped altogether for a few months.

Lionel Andres Messi is an Argentine professional footballer who plays forward and captains Spanish club Barcelona and the Argentina National team. He is often considered one of the greatest players in the world of all time. The alone player in history to possess five Ballon d’Ors. This 5’9″ is probably the finest dribblers of all time. His playmaking capacity, quality of passing, finishing, and scoring capacity. He had broken the record of top goal scorer of Ronaldo in 2021. He makes his position on the top in the list of Top 10 best football players in the world.

Neymar da Silva Santos Júnior known as Neymar is a professional footballer who plays forward for the Brazil national team. Neymar is the second-highest goalscorer for his national team. He was a key player in Brazil’s victories at the 2011 South American Youth Championship. Neymar ranks among the world’s most prominent sportsmen. Neymar primarily plays as either a central striker, second striker, winger, or occasionally as an attacking midfielder, and has been described as a true phenomenon. Neymar won three league titles, three Coupe de France and two Coupe de la Ligue.

Robert Lewandowski is a Polish professional footballer who currently plays for Bayern Munich and Poland’s national team. He is popular among fans for his positioning, technique, and finishing. He is considered one of the best strikers in the world. In 2020, he received IFFHS World’s best top goalscorer awards. Lewandowski also won the Best FIFA Men’s Player Award and the UEFA Men’s Player of the Year Award.  After such an incredible season, Robert Lewandowski is well in the conversation for the 2020 Ballon d’Or.

Kylian Mbappe is a professional footballer who plays as a forward for the France national team. Mbappe began his senior career with Ligue 1 club Monaco, making his professional debut in 2015, aged 16. At the International level, Mbappe made his senior debut for France in 2017, at age 18. Mbappe became the youngest French player to score at a world cup and became the second teenager after Pele to score in a World Cup Final.

Kevin De Bruyne is a professional footballer who plays as a midfielder. He is widely considered one of the best players in the world. De Bruyne made his full international debut in 2010, and he has since earned 80 caps and score  21 goals for Belgium. He is the assist king, with City scoring a goal provided by the Belgian once every two Premier League games. De Bruyne has been named in the IFFHS Men’s World team.

Virgil is a Dutch professional footballer who plays as a center-back for the Netherlands national team. He joined Southampton before signing Liverpool in January 2018 for  £75 million. Van Dijk reached back-to-back UEFA Champions League finals in 2018 and 2019. Van Dijk made his international debut for the Netherlands in 2015 and became captain of his country in 2018. In 2018, he scored his first international goal in a 3-0 win against Portugal.

Sadio Mane is a Senegalese professional footballer who plays as a winger for premier league club Liverpool and Senegal national team. However, his contribution to Liverpool’s first league title success for 30 years is reflected in his position as the highest-ranked player from Jurgen Klopp’s team. Mane’s managed to eclipse the outstanding Mohamed Salah and Roberto Firmino last season as Liverpool claimed the Club World Cup and Premier League titles. The 28th-year-old scored 18 goals and provided seven assists as Liverpool claimed their long-awaited 19th league championship with considerable ease, although statistics alone do not measure Mane’s importance.

Riyad Mahrez is a professional footballer who plays as a winger for Premium League club Manchester City and captains the Algerian national team. A left-footed player, Mahrez usually plays as a right-winger, a position that allows him to cut inside and shoot on goal with his stronger foot. Riyad Mahrez has 10 goals and 12 assists in the Premier League this season. While he is actually only the fifth Man City player to reach double digits in goals and assists this season, he has only started 60% of City’s matches and was benched for five of them. Mahrez’s control and first touch are absolutely extraordinary, and he would arguably make it into the starting XI of any other team in the world.

Erling Braut Haaland is a Norwegian professional footballer who plays as a striker for Bundesliga club Borussia Dortmund and Norway national team. This time Haaland was still a Red Bull Salzburg player. Sure he had already scored eight champions league goals for the Australian side during the 2019-20 group stage. Haaland’s debut for Dortmund came against Augsburg, and he promptly scored a 23-minute hat-trick after coming off the bench.

1.Who is the best football player in the world?

Lionel Messi is the best football player in the world.

Robert Lewandowski is No.1 football player in 2021.

Published in A to Z, Country, News, Personality, Social and Sports