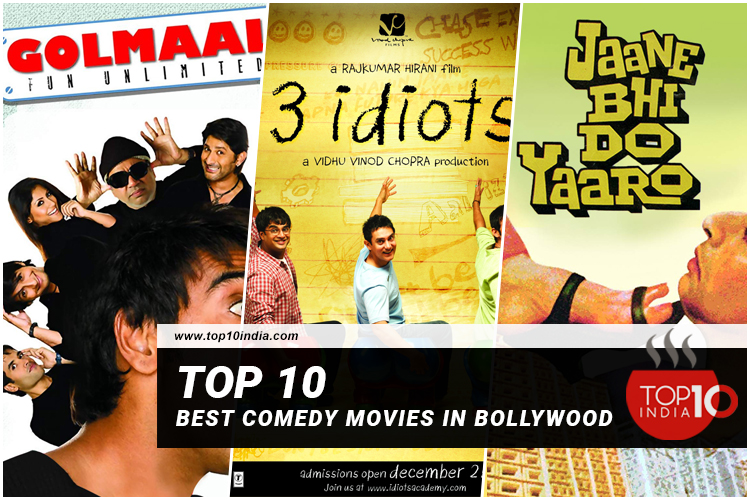 Top 10 Best Comedy Movies in Bollywood– As we all know that laughter is the best medicine that builds our immune system by removing stress, and protects us from the bad results of it. One of the many ways to sort stress is to laugh by watching comedy movies. It relaxes the mind and body and makes us feel better. When we laugh, we feel charged and energized. Our Bollywood is very smart in catching and cashing feelings and many comedy movies are made to entertains us and bring Box Office collections for Bollywood.

Here we are going to discuss the top 10 best comedy movies in Bollywood based on IMDb ratings. These movies are a good source of entertainment for us and our families. So, let’s check out the list given below-

Golmaal was released in the year 1979. The story and dialog of this movie are written by Rahi Masoom Raza and Sachin Bhaumick and produced by N.C. Sippy. The story starts with Ramprasad who works for Bhavani who forbids his employees from pursuing any hobby. Everything was going well until Bhavani spots him watching a hockey match. When asked about this Ramprasad lies to him to secure his job and said that he is having a twin. From here the golmal starts in the movie with hilarious twists and turns. The movie was a commercial success and critically acclaimed.

3 Idiots released in 2009 was a blockbuster movie with a completely fresh concept and a brand-new story. The movie shows the bond of friendship between Farhan, Raju, and Rancho. Rancho has a new and unique outlook to see things. This movie questions the education system and the way of study. The movie binds its audience to the chair and everyone loves to watch this over and over again.

Jaane Bhi Do Yaaro is a movie released in the year 1980 and is a crime Comedy movie. It’s a satire on our Indian political system and showcases corruption deeply dissolved in the roots. The story is about two friends who open a photography studio to earn money for their living. Then they meet Shobha who asks them to investigates a builder Tarneja. This brings many twists and turns making it a great Comedy. The comic timing of characters makes everyone laugh out louder.

The movie was released in the year 1982, is considered one of the best films of all time. It was based on “The Comedy of Errors” a play written by Shakespeare. The story of the movie consists of two identical twins and their mistaken identities. Raj Tilak and Shammi have twins they called them Ashoka. They again adopt twins and called them Bahadur. Once while going on a trip, they met an accident and were left with one of each pair of twins. Years passed, and the wheel of fate turned around bringing all four twins in the same city. This adds a dose of comedy and confusion. The movie is a must-watch movie, it will never let you get bored.

Khosla ka ghosla release in the year 2006 is a movie based on one of the important dreams of a middle-class family to have a house of their own. The movie features Aman Khosla a retired person who wants to build a house in Noida but when he reaches to see his land, he finds that his land is captured by a builder Khurana. He was a Bahubali in the area. When Kamal Khosla was tired of trying everything but couldn’t get his land back. Upon seeing his father in this condition his eldest son Cherry along with his friends decides to teach Khurana a lesson and take the land back.

Choti si Baat is a story of a young man named Arun Pradeep. He falls in love with Prabha, when he saw her for the first time at the bus stop. He follows her to from a safer distance, which he thinks is safer. Prabha knows everything that Arun is doing, feels happy, and waits for him to move the first step. But Arun did not do that, he was very shy he never stand for himself always in self-doubt. Then a man Nagesh full of confidence tries to woo Prabha, who happens one colleague of hers. Arun felt sad and lost. Decides to seek the help of Colonel Nagendra Nath, who transformed him into a different good-looking, charming Arun. On his way back to Bombay he meets Prabha in a disguised manner and what happens thereafter is the essence of a story.

The movie is a remake of “Ramji Rao Speaking” a Malayalam film released in 1988. The story is about tenants and landlords in the dream city of Mumbai. Here Baburao Ganpatrao Apte is landlord, Shyam and Raju his tenants. Shyam came to the city to get a job in a bank in place of his father. Raju is a daydreamer, struggler who has not paid his rent for two years. Many quarrels occur between the duo and are solved by babu bhaiya. One day they get a ransom call due to a cross-connection. They see this as an opportunity to get money which is followed by different hilarious twists and turns in the movie.

Andaz Apna Apna is a story of Amar and Prem, who dream to become rich by marrying the daughter of a rich businessman. On the other hand, Raveena Bajaj daughter of businessman Ram Gopal Bajaj, with her secretary and friend Karishma comes to India to get a suitable groom. They both board the bus for Ooty where Raveena lives and both are going for the same reason to marry the heiress. But the story has a twist Ram Gopal Bajaj has a twin brother who is a gangster. The story then goes on a roller coaster ride and makes its audience laugh out louder.

OMG called Oh My God released in the year 2012 and is a movie with a new concept about God and religious Dharmgurus. The story starts with an atheist named Kanji Bhai; his shop gets destroyed by an earthquake but he didn’t receive any money from an insurance company by showing him a clause “Act of God”. Losing his shop and money he decides to file a case against God and sent summons to all temples mosques and even churches. Lord Krishna comes and helps him to do the right and send a message in the society that there is propaganda going on in the name of  God.

Munna Bhai MBBS is a story of gangster Munna Bhai in Mumbai. He tells his father that he is a doctor but once his Father caught him, he feels ashamed of himself and decides to fulfill his father’s desire to be a doctor. Munna Bhai with hook and crook manages to get admission to a medical college. what happens there is the soul of the movie. This movie was a super hit and the comic timing of its characters was fantastic. The movie was commercially successful and critically acclaimed. The Munna Bhai and Circuit become famous and near-to-heart characters for everyone.

Which is the best comedy film in Bollywood?

Ans. Golmal is the best comedy Hindi film in Bollywood.

Ans. Yes, it is the remake of the Malayalam film Ramji Rao Speaking.

Published in A to Z, Entertainment and Social