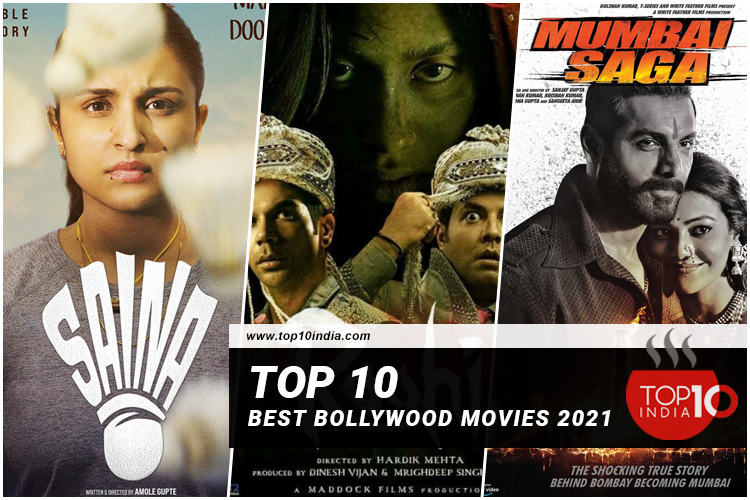 Top 10 Best Bollywood Movies 2021: The Bollywood film industry has seen a great setback this year as the sources revealed that Bollywood has faced a loss of more than 15000 Crores due to the COVID-19 pandemic which has forced every single person to stay at their homes and has paused all film screenings. The first trimester of the year has seen many movies in theaters, while in the second-trimester movies are normally released on online platforms as the halls and theaters have been closed.

So, out of the films released in theaters and on online platforms, the top ten movies based on reviews and their popularity among audiences, are given below-

This is the story of the rise and falls in the career path of India’s former world’s no. 1 badminton player Saina Nehwal. The movie also salutes the people who support her immensely and contribute to her unbreakable spirit. The tag line of the movie is “sportsman is not born overnight”. The film is truly based on sportsman spirit and it also showcases the rivalry of Saina with P. V. Sandhu. More details of the movie are given below –

Roohi is a horror/comedy-drama from the production house Jio studios and Maddock Films. The Box office collection of Roohi is 30.33 Crores. It tells the story of a ghost who abducts new brides on honeymoon nights when she is left alone. The movie also shows that how young girls are kidnapped for marriage. It shows the male dominating nature of our society which is accepted by all in the subconscious mind as if it is an integral part of society. This movie has received mixed reviews from its critics.

Mumbai Saga is crime – action movie released in 2021 from Bollywood Hindi language movies produced by T Series. The movie is based on an underworld story in the 80s -90s. It is the story of simple man Amartya Rao, living a simple life in Mumbai to that of a gangster in the early 90s. Amartya Rao is said to be ruling half of Bombay (now Mumbai) at that time. He had many close encounters with the police which makes the film breathtaking and adventurous. More details of the movie are given below-

No. 4 Radhe: Your Most Wanted Bhai

Radhe: Your Most Wanted Bhai is a Hindi language movie produced by Salman Khan, Sohail Khan, Atul Agnihotri, and Zee Studios. Radhe is the story of a police officer who vows to finish the crime from the city. ACP Rajveer Shekhawat catches the most dread criminal Gani Bhai and he understands that a crime syndicate is secretly running in town by the wealthiest men in town. ACP goes on a manhunt to eradicate the crime as well as criminals from the city. The movie has good action scenes with a slight dose of comedy and a lot of thrilling scenes.

99 song is a good movie to watch when a person is feeling low. This movie is a motivational story of how to chase dreams with passion. The music of the movie is very good, heart-touching, in other words, we can say that Music is the soul of a movie. Its main story is about a tortured yet passionate songwriter cum composer as well as a singer, who was challenged to complete 100 songs to marry the girl he loves. The movie is very inspiring, passionate good to watch a film. It’s a feel-good movie, a heart-warming movie unique by its nature. The film is co-written and produced by musician A. R. Rahman. He is making his debut from this movie in both fields of writing and production. Few more details of the movie lie here-

The Big Bull is a crime drama movie released in 2021 in Hindi cinema. The movie is said to be about the real-life story of Hemant Shah in the last 80s -90s. Due to the outbreak of pandemic covid-19 the movie is not released in theatres so it is releasing an online platform Disney+ Hotstar. The movie is about a financial scam in the country. It’s the story of Harshad Mehta a common man turned Big Bull of financial systems. He was a small-time stockbroker by using his mind and loopholes of Indian banking systems he created a big fraud. But with a matter of time, his dreams turn into nightmares as the country has been moving towards liberalization policy. Overall this movie is a decent attempt to tell India’s biggest financial scam. Few more highlights of the movie lie below-

Madam Chief Minister is a political drama based on the Clash between the Dalit and the upper caste people of the politician in the society in Uttar Pradesh. The main storyline of the movie is about a Dalit girl who rises and one day becomes the Chief Minister of Uttar Pradesh. This movie is the story of Tara Roopram who fights with all the odds of life, faced betrayal and many more sufferings but yet she turned out to be the first Lady CM of the state from the Dalit background. Few more highlights of the movie lie below

Kaagaj is a comedy Hindi language movie released in 2021. Due to the outbreak of pandemic covid-19, the movie has not been released theoretically and it has been released on the online platform. We can see this movie on Zee 5. The story of the movie is about a poor farmer Lal Bihari from the small village Amilo Mubarakhpur, who was declared dead on government official papers. It is a satire on the social status of people and the ups and downs in the movie seems like it reflects the real-life problems of many persons in India

Bansuri: The Flute is the Hindi language drama produced by Mou Roychaudhary and written as well as directed by Hari Vishwanath. The film is based on the movie Vanavillin Ambbu by Augusto. The story of the movie is simple, it’s about a boy who is inspired by his father and vows to be a flutist one day like his father. Whatever his mother told him about his father being a great flutist provoked him to be like his father but what if it all was a lie?? Few more details of the movie lie below-

This movie was released on Amazon Prime, an online platform. The movie features Ranveer Malhotra who faces many obstacles on a plane for his survival. This is an action thriller Hindi language movie full of adventure and suspense that stuns its audience with its scenes and striking VFX. This movie is unique, engaging, and fresh. Few more highlights of the movie are given below-

Who is the Lead Star Cast of Madam Chief Minister?

Is the movie Big Bull is based on a real event?

Ans. Yes, it is based on the real scam by Harshad Mehta.

Published in A to Z, Entertainment, Social, Sociology & Society and Sports