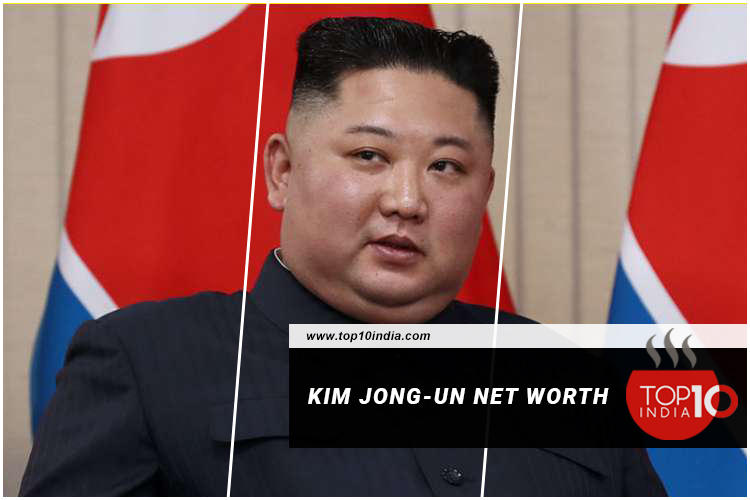 Kim Jong-un Net worth:- The net worth of North Korea’s dictator is about 5 billion dollars which is 39000 crore INR he has been in power and is known for his bad political, diplomatic decisions and authoritarian approach. He is in power since 2011 right after the demise of his father.

Although a very limited amount of knowledge is known to the world in comparison to the other world political leaders around the globe. In North Korea, he is commonly referred to as “Dear Leader” by the media. Kim Jong-un also grips many titles in the country which includes Marshal and chairman of the Central Military Commission, Chairman of the State of Affairs Commission, and Commander in Chief of State which includes him in the limelight now and then. As the supreme leader of North Korea, Kim Jong-un has been at the cutting edge for countless controversies because of the crimes committed in his nation during his reign which includes torture, kidnapping, abduction, rapes in the prison camps, and many more.

Most of Kim Jong-un’s childhood information is unknown which includes his original date of birth, primary and high schooling. According to various reports and official records he was believed to born on January 8, 1982, as the third son of Kim Jong-il and grandson of Kim ll-sung who was the founder of and led North Kores in 1948 until he died in 1994  along with one elder brother Kim Jong-Chul born in 1981, and one younger sister Kim Yo-jong to be born in 1987, and three other alleged siblings from his father. He was believed to be a shy and introverted child in his early days of life.

All the siblings and he himself is believed to have lived in Switzerland as well as the mother of the two youngest sons in Geneva. He completed his schooling in a private school named International School of Berne in Gumligen in Switzerland under the pseudonym ” Pak-un” from 1993 to 1998 where he was described as a shy and good student who was good with his classmates and staff members. It was also said that he always was accompanied by an older student who was believed to be his bodyguard but later it was said that he was not Kim Jong-un he was his brother Kim Jong-Chul.  Later it was said that he attended the Liebefeld Steinholzli State school in Koniz near Bern under the same pseudonym ” Pak-un” or ” Un-pak” from 1998 until 2000 as the son of an employee of the North Korean embassy in Bern. Authorities also confirmed that a student named ” Pak-un” a North Korean student from North Korea attended the regular classes for foreign language and later attended the regular classes and leaving the school bluntly in the autumn of 2000 where he was described as the well hardworking and ambitious student who liked to play basketball whereas the grades and attendance were reported very poor.

He has a fleet of 30 Mercedes Cars.

He owns a private jet worth 1.5 million US dollars and

He also has a custom-made 200 feet Yacht.

His hobbies include basketball, computer games, and watching Jackie Chan action movies. He likes to spend money on drinks, pets, and perfumes. He is a heavy smoker too. Despite all the facilities and comforts dictatorship has to offer, Kim suffers from insomnia, psychological disorders, high BP, and diabetes.

According to many reports, Kim is considered a football lover and foodie who loves to eat various foods. Kenji Fujimoto the personal chef of Kim’s family once told the media he is like his father in terms of face, body shape, and personality. His favorite teams include Chicago Bulls and Los Angeles Lakers. He is also a great personality and very smart as per the meeting after Donald Trump told the media that how much he loves and cares for his country.

In 2018 Forbes magazine ranked Kim Jong-un as the 36th most powerful person in the world highest by any North Koreans and he is trusted by 78% of the people according to a poll conducted by the South Korean inter-Korean summit. According to various sources and reports, he loves to drink a lot likes to party all night just like his father used to do, and also spend a lot of money on liquor and other expensive items

Due to his bad eating habits and poor living lifestyles Kim is suffering from diabetes and is a patient with hypertension. According to reports he has also gained 30 kilograms of weight in the last five years and is estimated to weigh around 130 kg.