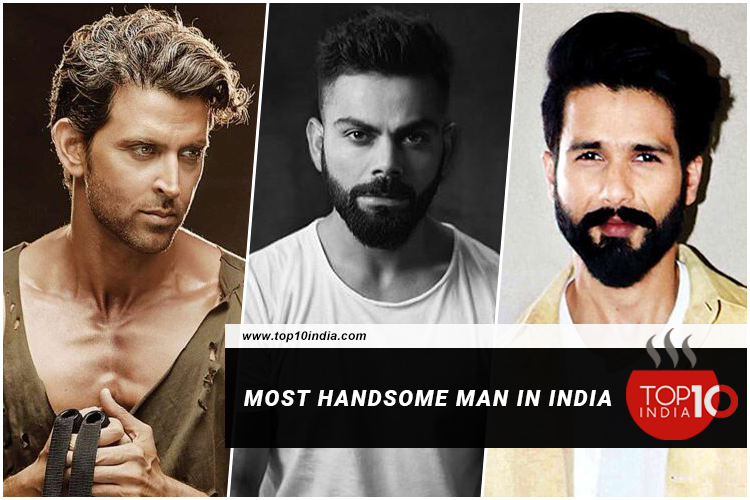 Most Handsome Man In India: In India there are many handsome and dashing men. Most of the smart men belong to modeling, acting, and sports. These men do a lot of hard work to maintain their physical fitness. The combination of their dashing looks and hot physic makes the most handsome man in India.

Most Handsome Man In India

Hrithik Roshan ranks at the first position in the list of most handsome man in India. He is a very popular Indian actor. He is the son of film director Rakesh Roshan. He gained stardom from the movie Kaho Naa Pyar Hai. He is also popular for his hot physic and amazing dance moves. A wax figure of him was installed in Madame Tussauds in London. He was ranked 1st in the list of 50 Sexiest Asian Men in Easterns magazine in 2011, 2012, and 2014, and was in the top 5 2010, 2013, 2015 to 2018.

No 2. Virat Kohli (Most Handsome Man In India)

Virat Kohli is the current captain of the India national team. He is not just a great cricket player but also one of the most handsome personalities in India. His father was a criminal lawyer and supported him a lot in his cricket. But Virat lost his father at a very early age. He has achieved huge success in his cricket career. He is also honored with national honors- Arjuna Awards, Padma Shri, and Rajiv Gandhi Khel Ratna Award. In the list of 2020 Top 100 Highest paid athletes in the world, he was ranked 66th.

Shahid Kapoor is a very known name in Bollywood Industry. He is a very popular Indian actor. He is the son of actor Pankaj Kapoor. He started his career with tv commercials and background dancing. Later he started getting movies offers and started working in movies. He didn’t get success with his first movie but his work and patience took him towards success.

Vidyut Jamwal is an Indian actor and martial artist. He is an actor but you haven’t seen him in many movies but still, he is one the most handsome man in India. Beacuse of his great physic and looks. At the age of 3, he started his training of Kalaripayattu. He is also listed in the list of top 10 martial artists in the world at 3rd position.

No 5. Ranbir Kapoor (Most Handsome Man In India)

Ranbir Kapoor is a very popular Bollywood actor. He is the son of Rishi Kapoor and Nitu Singh, both of them belonged to the Bollywood industry. He is popular among Indian girls because of his charming looks and smile. Some of his most popular movies are – Yeh Jawani Hai Deewani, Rajneeti, Ajab Prem Ki Ghazab Kahani, Barfi, Sanju, and Rockstar. H also loves football and is the co-owner of Mumbai City Fc of the Indian Super League.

Vijay Deverakonda is a very popular actor and producer in the South film industry. He is popular across India for his looks and great physics. He gained huge stardom after his movies Arjun Reddy and Dear Comrade. In both movies, he plays different kinds of roles but his acting has made everyone fall for him.

Ranveer Singh is a very known name in Bollywood Industry. He is popular for his funny, charming, and energetic nature. When is started his acting journey, he auditioned for many movies but didn’t get any good opportunities. At one point, he was very frustrated and disappointed with all this but didn’t quit it. He was auditioned for two weeks for his first movie Band Baja Baraat but the wait was worth it. Because he gained success direct after his first movie. His most appreciated movies are Ram-Leela, Bajirao Mastani, and Padmaavat.

No 8. Vicky Kaushal (Most Handsome Man In India)

Vicky Kaushal is a very popular Indian actor. At one time, he was declared the national crush of Indian girls. He has pursued engineering from the Rajiv Gandhi Institute of Technology. He also worked as an assistant under Anurag Kashyap for the movie Gangs Of Waseypur. He is popular for his charming and sweet personality.

Kartik Aryan is a very popular Bollywood actor. He completed his engineering at D.Y Patil College of Engineering, Mumbai. He gained popularity after his debut movie Pyaar Ka Punchnama. After some time, when he appeared in more movies, he got more fans for his dashing looks, charming smile, and hot physic. He was also listed in the Forbes Celebrity 100 in 2019.

Sidharth Malhotra is a very popular Indian actor and former model. Before making his acting debut, he worked as an assistant director to Karan Johar for the movie My Name Is Khan. He gained stardom with his debut movie ‘Student of The Year’. He is popular among Indian girls for his shy, calm, and charming personality.

Who is the No 1 handsome man in India?

Hrithik Roshan is the No 1 handsome man in India.

Who is World No 1 handsome?

Robert Pattinson is the World No 1 handsome.

Who are the most handsome men in India?

In the above article, you can check out the most handsome men in India.

Published in A to Z, Brands, Entertainment, News, Personality, Social and Sociology & Society